CANNIBAL HOLOCAUST AND THE KARDASHIANS 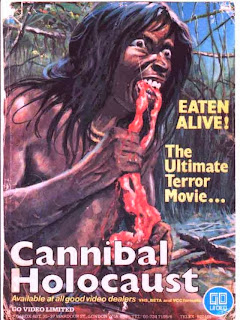 Not too long ago, an essay topic was posted in a Facebook group I belong to, The Madness Halloween Horror Movie Marathon: Portrait of a Video Nasty, "Ruggero Deodato's film 'Cannibal Holocaust' should be revered or reviled because..."

My feeling on this is that it should be revered for being so reviled.  This is the definition of a Video Nasty and had every reason to be banned, but also respected.  I don't love this film, but I respect the hell out of Ruggero Deodato for having the chutzpah to make it and defend it in court.

I wanted to see this film based on its reputation alone.  The original "snuff" film.  I knew nothing about this film as a child, and I am glad for it, but once I got older and more into harder and obscure horror, I read a few articles in various magazines, like Rue Morgue and Fangoria, about this notorious film.  By that time, none of the video stores around my area had it and I'm not sure if they ever did.  This film was like a dirty secret to which I just had to be privy.

Once I got into filmmaking with Michael Todd Schneider, I asked him if he had ever seen 'Cannibal Holocaust', and he told me he actually had a bootleg copy of it on VHS and almost immediately, we started watching.  First we watched Nacho Cerda's 'Aftermath,' which is one of the best shorts I have ever seen and highly recommend.  Then we got to 'Cannibal Holocaust.'
I sat through and viewed every frame.  I felt I had to soak it all in, even the animal death scenes, to get the full experience.  I felt it was a very twisted move playing that nice music over the horrific scenes. But from the point of view of the people in the film, if there was nice music playing people would watch it and not be as horrified.  It reminded me of "A Clockwork Orange" when Alex was going through the Lodovico Treatment and the lovely, lovely, Ludwig Van was playing over the scenes of violence.  When the film was over, I was silent for a few minutes, trying to grasp what I had just watched,  It wasn't as bad as I expected.  When you hear about the film without having seen it, you start imagining how what you think you'd see.

The Filmmaker characters were absolute scumbags. They went into the jungle, where the inhabitants lived freely and separated from modern society, and start wrecking things because they have the guns and think that because they come from a bigger, more modern jungle built with steel rather than trees that they are superior.  Let's bring it down to the base level, the Filmmakers were just savages from a different jungle.  That's what the whole film was about.  The Filmmakers hid behind their society and upbringing in the "civilized" world, but they invaded, raped, murdered, and destroyed in the name of "art."  None of the Filmmaker characters had any redeeming qualities, and when they finally get their comeuppance, I was cheering.  I absolutely hated them.  And that's why I liked the film.  It made me feel something.

The people in the screening room and behind wanting to air the documentary on television were really no better at the base level.  They were the Proprietors and the Filmmakers were their henchmen, if you will, given free license to turn in a product.  The Woman in the room even said, "The footage is exceptional!"  She goes on to say, "Who knows about the Yakumo civilization!  Today people want sensationalism.  The more you rape their senses, the happier they are!"  Spoon feed this mindless violence to the mindless masses and they will want more, basically.  Sadly, it's true, even today with some of the dreck that's put on television like, 'Keeping Up With the Kardashians.'  While not senseless violence,  it's just senseless.  Some call it a "guilty pleasure."  It sensationalizes the overprivileged and overindulged family that is famous FOR NO REASON, well other than that sex tape, and through their insane fame, they always find something to whine about!  But people eat it up like candy.  I've watched it, I'm not innocent.  "Let's watch how rich people live and wish we had all that money and blah, blah, blah..." (Average Viewer, 2013)  I love fake violence as much as the next horror fan, but in the context of the film, the Woman was perfectly happy showing the documentary, once edited, fully aware of what was done...that is, until she saw the rest of the footage.

After the film was released, it was so realistic that people thought they were watching actual deaths on screen.  After the film premiered in Milan in 1981, Ruggero Deodato was arrested and his film confiscated.  Originally, Deodato was just charged with obscenity, but then murder was added as the court thought the main characters were murdered on screen and that the impaled woman was real. However, Deodato had his actors sign a contract stating that they wouldn't appear in any form of media for 1 year just to go further the "authenticity" of their deaths on film.  He then had to void the contracts and brought them onto a television show to prove they were indeed still alive.  After the courts were satisfied of that, they still charged him, rightfully, with animal cruelty and he got a fine and a suspended sentence.  The film was banned until 1984, but even then it was censored heavily.

This is one of those films whose reputation precedes it.  If you call yourself a horror fan, you should watch this film at least once just to say you've seen it.  Like I said before, I don't love this film.  I don't watch it that often, in fact I haven't watched it in at least a year.  This is a special mood film, or when you need to gather information for an essay.

Revere it.  Revile it.  JUST WATCH IT!