The Church opens in Medieval times where a religious order, the Teutonic Knights who, at the behest of the Church wiped out an entire village because its inhabitants were possessed by demons. On the site of the village, a church was constructed in order to keep the evil held captive forever. 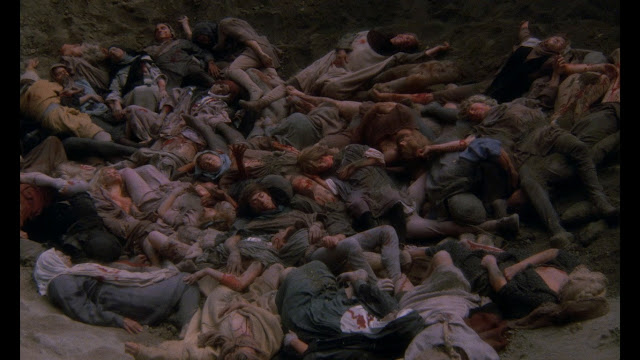 Hundreds of years later, the church is crumbling, but is in the process of being restored. Evan (Tomas Arana), the new church librarian, walks in and is immediately infatuated with Lisa (Barbara Cupisti), who is restoring a large mural. Together, they discover that the church is hiding something, but not sure what. One night, Evan puts off making love to Lisa (Sidebar: seriously, what the fuck was he thinking? Lisa was ultra-sexy) in order to investigate further. He heads to the bowels of the church and discovers a cross with a circular stone depicting a goat's head with seven eyes. With a turn and lift of the stone, all Hell breaks loose to exact revenge on whomever gets in its path. 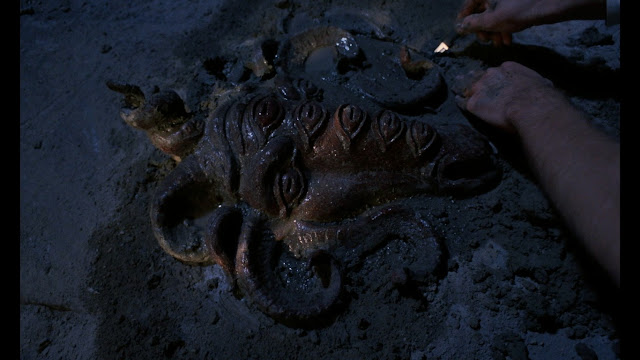 "They'll make cemeteries their cathedrals, and tombs, your cities." Fun fact: The Church is considered an official sequel to Demons II. It's really not, but it was planned and billed that way. They're in the same Universe; Same Earth's, you know? The Church is Demons/Demons II's serious, but successful older brother. Dario Argento and Franco Ferrini had envisioned The Church as being the third part in a Demons trilogy entitled, Cathedral of Demons or Demons: Cathedral, which is a bad-as-fuck title. 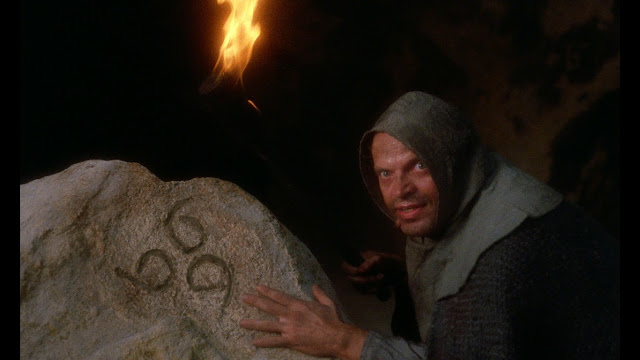 Striving for a more sophisticated film than the two Demons films, which Soavi described as "pizza schlock," opted not to go in that direction. However, the similarities are still there, like a scratch or touch from someone possessed will make you a demon too. Evan got scratched on a piece of glass, or maybe it was a claw, while he was hallucinating after he removed the stone with seven eyes. 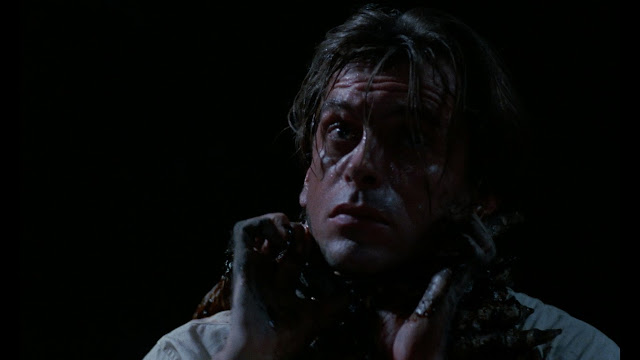 The film's title has a double meaning: The Church as a physical building and The Church as an organizational entity. There was a reason medieval times was also called the Dark Ages: the authority of the Church was ABSOLUTE. Anything that went against the Church was heresy, and if you were found guilty of heresy, even if it was for a science that'd benefit humanity, you'd be put to death. "Oh you created a light bulb?" Death. (Then the church would've claimed it for themselves and said it was divine light...) 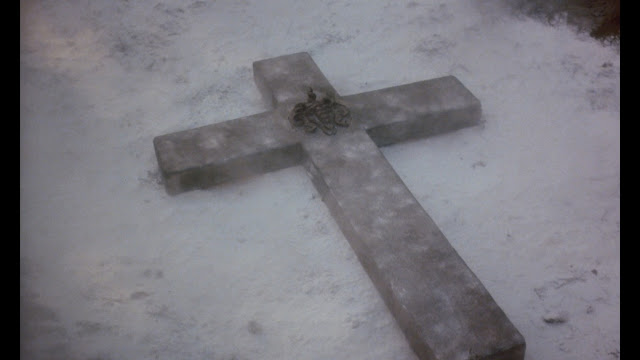 Also, when the Bishop (Feoder Chaliapin) discovers the manuscript revealing the history of this particular church, he elects to keep the secret to himself and let the evil run rampant on humanity, calling it a just punishment for their wicked ways. He believed his position within the Church gave him authority over all mankind and thus decided their fate. Just before he plummets to his death, he exclaims,  "I am the Church!" The egotistical prick gets skewered on a gargoyle, and it rules. 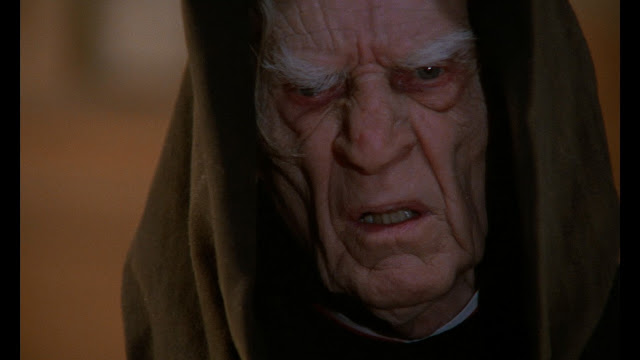 The main characters were Father Gus (Hugh Quarshie), Evan (Tomas Arana), Lisa (Barbara Cupisti), and Lotte (Asia Argento). Father Gus was the reluctant hero and an avid archer. I wish they'd done more with him, or he had a little more time to perfect the part because, it comes off a little unbelievable to me, and he IS a good actor. Even his death scene was weak. That giant pillar fell on him and it seems like he waited to react. Some of that may also have been the directing. I don't know. 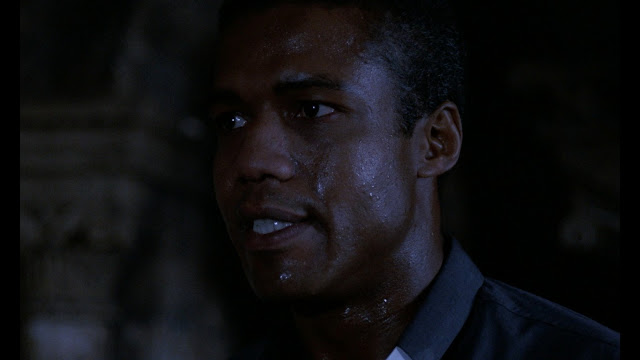 Being the new church librarian isn't as glamorous as glamorous as the ad probably made it look.  Evan wanted something more exciting than a bunch of moldy old books, and when Lisa came to him with the parchment, he got lusty for the mystery, and it suited him. And it turned into the classic, you-got- more-than-you-bargained-for as he gets smacked in the face with the Devil himself. Also, I'm man enough to say it: Evan was a good lookin' dude. His face was statuesque, angular; a good movie face. But, when he went bad, those same features betrayed him, making him look way more sinister. Couple that with a nice performance, Arana was a perfect villain. 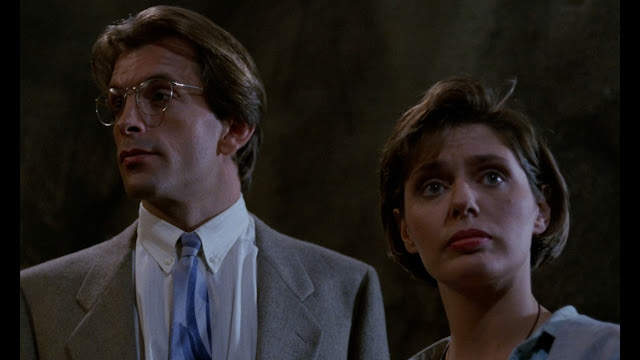 Lisa was just so cute. Dio Mio! It wasn't hard to see why Evan fell for her instantly. Lisa was a young art preservationist for the local museum looking for a good time and a little bit of action of both the biblical and fun variety. The way she didn't give a damn when Evan stopped working on her and went looking at that parchment was hilariously surprising, you could tell she wasn't looking for attachment. She's laying there half-naked like, "We doing this or what? No? Cool. Let's see what Mickey's up yo," and whips out her Mickey Mouse comics. Sadly, her fate was to be the Devil's Bride. 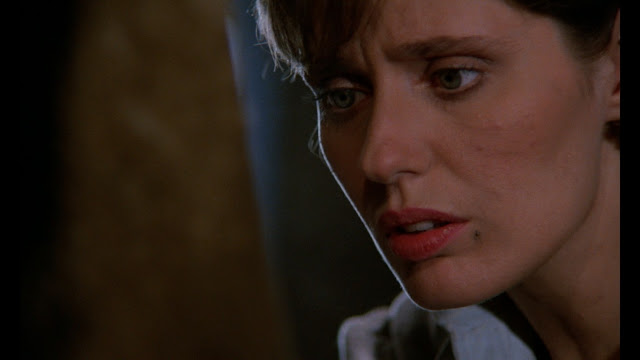 "Have a biscuit. They're groovy!" The old couple were my favorite minor characters. The old Woman used hip lingo (though, a decade or two late) like, "groovy" and "fab" and the like. The old Man was the most crotchety old Man there ever was. They were constantly bickering with each other and added a cute awkwardness to a pretty crazy situation. Although, when the church is sealed up and there is no way to alert the outside to the troubles inside, they climb up to the bell tower. When no ropes can be found to ring the bells, and after one insult too many, the old Woman rips her husband's head off (sadly, this is all off-screen), and bangs it against the bell, signing all the while. I don't know why, but when she is ringing the bell with her husband's head, I find it unsettling. 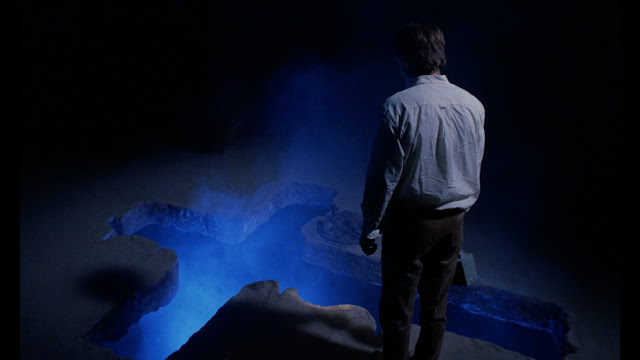 For the longest time, I only had a copy of The Church I burned from a rental from Hollywood Video. Even at that time, the DVD was long out of print. I just recently bought the Scorpion Blu-Ray and it is leaps and bounds superior in quality. (A burned DVD was pretty much the same quality as a regular DVD, only slightly lesser, in my opinion). But holy shit: That blu-ray looks really nice. The 2K scan and color correction brought out so much latent detail. 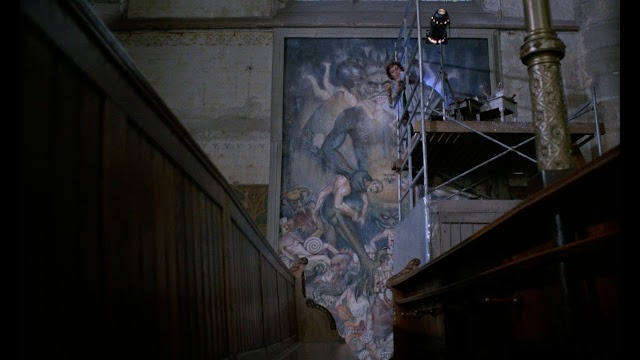 One scene, in particular where the transfer shines is where Evan removes the stone and the cross drops through the floor. On the DVD, it falls into a bottomless, black abyss. On the blu, the cross actually drops into a large body of water. That was a huge 'what-the-fuck' moment for me in the best way as possible. It was a weird, new, mind-blowing detail I didn't know was there. Also, if you really pay attention, the cross just disappears! It's falling, falling, falling, gone. No splash, they just cut it. 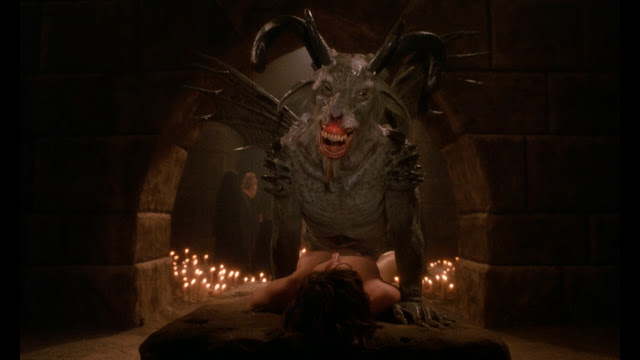 As you know, special FX are one of the most important aspects of almost any Horror film. The 2K scan really highlights all the hard work that Sergio Stivaletti and crew put into the effects, especially that animatronic Devil head and wings piece. The first look you get of this creature is outside of Lisa's window. On the DVD, the blue light washed out a lot of its details. The blu-ray fixes this, and we are treated to a more horrifying first "jump-scare" glimpse of the creature. Then at the climax of the film, the Devil makes Lisa his bride and has sex with her on a stone altar. During his "vinegar strokes" is when the creature effect is its most animated. 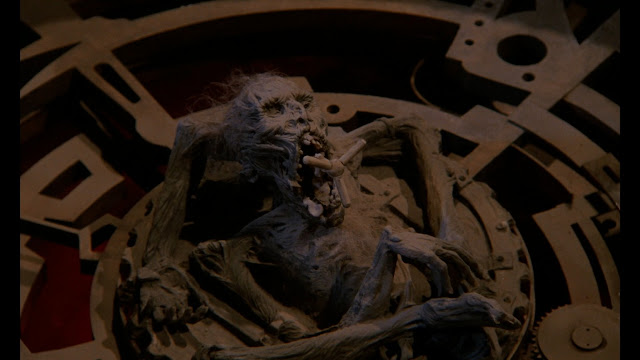 While all the effects were good, my preference is for the writhing mass of mud, excrement, evil and humanity that rises up from the depths. The sins of the past can't stay buried forever. When it is in full view and you freeze-frame, it resembles a monster's head. Sort of like Dali's famous, Skull. It was a very impressive set piece complete with moving people parts as the flesh for the "beast's" face. A pretty impressive feat. 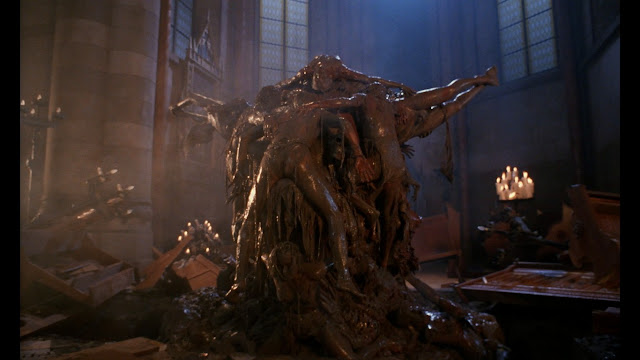 PSSST: I know this article is long enough, but there's only a tiny bit left ;) Hang in there, dudes/dudettes. You're doing great!

Did I mention the fucking boss soundtrack? No?! Well, it's fucking boss. Kieth Emerson (Emerson, Lake, & Palmer), Goblin (Simonetti and Co), and Simon Boswell..(Simon Boswell). Very amazing sound. Great synths. Intense. Favorite tracks are Le Chiesa (Song from the church collapse), a real cool, chill, progressive track perfect for the the crumbling house of God. Lotte: reminds me of Legend for some reason. Real Earthy. Good build up and it tells a story. It makes Lotte's ending in the film seem like a happy one which, it kind of is when you think about it...Revenge is sweet. 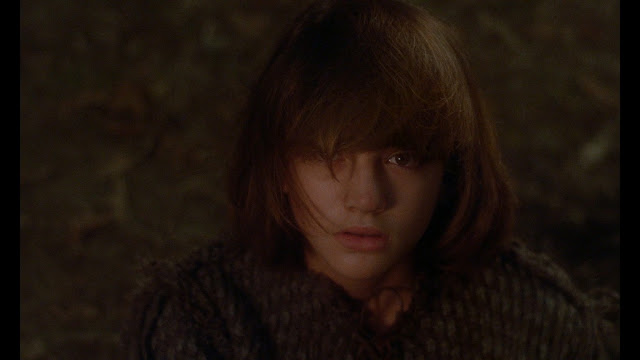 If this one has flown under your Italian Horror radar, OR you've put off seeing it, you should take a seat in The Church; It's an underrated gem that has a little bit of everything for all discerning horror fans. Sure, it has it's flaws but you'll be an even more well-rounded horror fan for having seen The Church.

"But, that's just my opinion. Now watch it and form your own." - Jon Wamsley

(P.S. Fun Fact: per Asia Argento on the Scorpion Blu-Ray: They had to de-sanctify the 2 churches they filmed at because of the "Evil" shit Soavi and Co had in store. 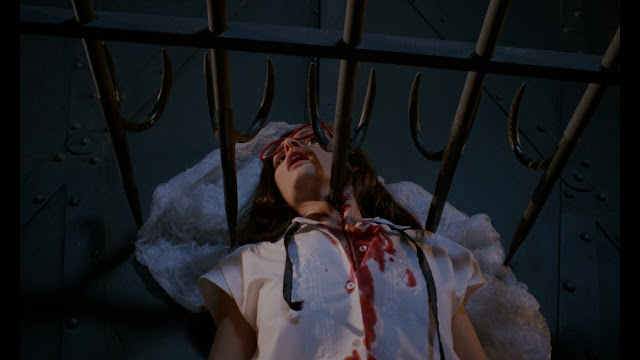