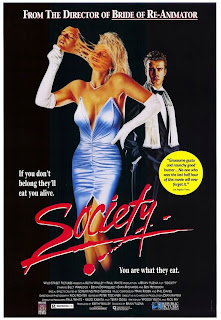 “You will make a wonderful contribution to Society.”

Coming June 9th from Arrow Video is the long out of print ‘Society,’ directed by ‘Re-Animator’ producer, Brian Yuzna, in a special Blu-Ray DVD combo set. 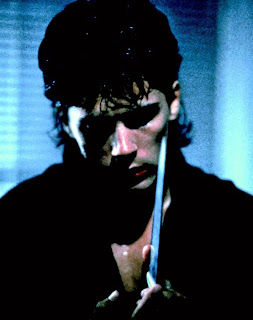 Synopsis:
Billy Whitney (Billy Warlock) has always felt something wasn’t right about his life. But what could be wrong: he lives in a huge house in Beverley Hills with a prominent family, the weather is gorgeous daily, and he is a good athlete and debater with a bright future. Yet, Billy feels like everyone around him is in on some sick joke and he is the punchline. He doesn’t look anything like his parents, and they treat him much differently than his sister, like he is a lesser person. While he is somewhat right in his suspicions, Billy has no idea about the horrible truth that will soon rear its horrible, ugly, shunty head.

Released in 1989, ‘Society’ was the last great gore film of the decadent excess that was the 1980’s. It’s funny: it’s considered a gore film, but there’s virtually no blood or guts at all. You may remember Society’s video box gracing the shelves at the local mom and pop shop, and that’s actually the only thing I remember because, I never got a chance to see the film until now, and it was worth the wait. I’m glad that I didn’t opt for a bootleg DVD that was just a VHS transfer to a DVD-R because, the Arrow Video blu-ray is remastered in 2K from the original negative delivering an unparalleled presentation. 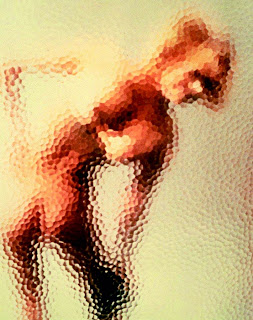 This film is demented, depraved, disgusting and delightful because, it really captures the over the top excess of the rich of the 1980’s. As a whole, Society follows the general blueprint of an 80’s teen film: parties, popularity, rejection, awkward social interactions and trying to fit in. But then it morphs into the most messed up episode of ‘The Twilight Zone’ you can imagine, as paranoia plays a big part in the story. The characters are really fun. Billy is a nice kid, just trying to fit in, as most teenagers do, Milo (Evan Richards) is Billy’s best friend, Clarissa (Devin DeVasquez) is the most popular and beautiful girl in school and the object of Billy’s affection, but she, like Billy, is also an outcast, Ted “The Tycoon” Ferguson (Ben Meyerson) is the typical most-popular-rich-guy in high school douchebag. The members of Society are very pompous and self-absorbed, but that’s just how they are made. Apparently, their lineage goes all they way back to Caesar and Ghangis Kahn and probably even further than that, which makes sense thinking of how barbaric and decadent these two time periods were.

Through various writings, I was made aware of Society’s contribution to the body-horror sub-genre 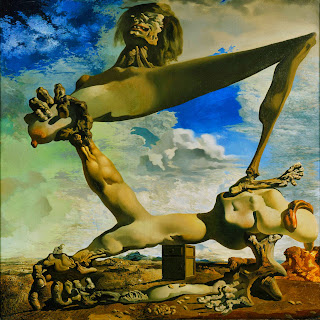 and had ample opportunity to watch the moneyshot that is the “shunting” via Youtube, but thankfully, I resisted the temptation. If you are Society virgin, nothing can prepare you for the payoff of the “shunting” scene and you shouldn’t spoil it for yourself. The use of the “Argento Red” overlay during the entire final sequence of the film made the “shunting” even more disgusting and surreal, giving it the look of a seedy whorehouse. The insane FX were done by none other than “Screaming Mad” George and inspired by the paintings of Salvador Dali, specifically “The Great Masturbator,” “Autumn Cannibals,” and “Premonition of Civil War” and if you pay close attention to the “shunting,” you will see these paintings almost recreated. What really puts the scene over the top is the classical music redone on a synthesizer, almost mockingly, making the scene even more unsettling, if that’s possible. The end credits uses a version of the song “Eton Boating Song,” the school song for Eton College, sung by Soprano Helen Moore. It’s very pretty until you see the lyrics: 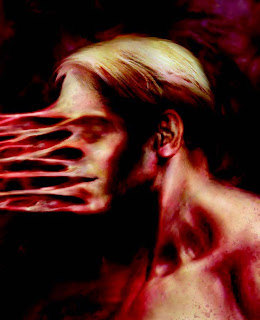 Society’s social commentary about rich vs poor is still relevant, if not even more relevant, today with the advent of the “Occupy Wallstreet” movement and the coining of the term, “The 1%.” It’s kind of like a big corporation that absorbs a smaller corporation, takes what it needs, then expels the rest. The FX also aged gracefully and stands as a testament to the usage of practical FX. If Society were made today, the “shunting” would have been a CG pile of shit.

If you buy only 1 Arrow Video release this year, make it Society, and make it quick, as only 5,000 will be produced. 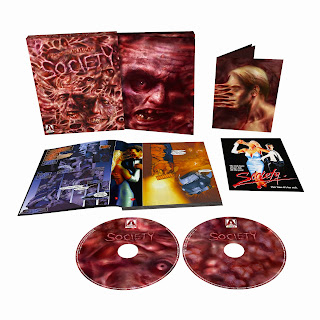