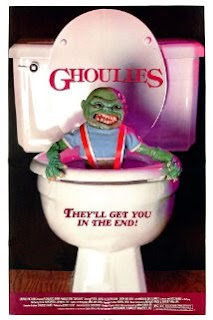 Released in 1984, 'Ghoulies' is about a baby, Jonathan (Peter Liapis), that was to be sacrificed during a Satanic ritual by his father, Malcolm (Michael Des Barres), but saved by his Mother before her death at Malcolm's hands. When Jonathan gets older, he inherits the mansion where Malcolm lived and died, and upon cleaning up the house, he finds black magic artifacts and starts performing rituals with his girlfriend, Rebecca (Lisa Pelikan). Jonathan summons little ghouls to do his bidding, but inadvertently resurrects Malcolm, who has his own sinister plans.

'Ghoulies' is 1980's horror staple made during the heyday of Charles Band's, Empire Pictures. A personal childhood fave of mine with a fun story, good laughs courtesy of Scott Thomson in almost every scene he is in, good scares a la the clown scene and undead Malcolm. All the supporting characters each encompass the standard stereotypes: Mark (Ralph Seymour) as the dork, Robin (Chareen Cathleen) as the sexpot, Keith Joe Dick (Dick) as the Stud, and Mike (Thomson) and Eddie (David Dayan) as the stoners. The special FX still hold up today, for me at least. I love a good practical effect no matter how static or rubbery it is. Presented for the first time in 1080p, the picture is crisp, and the colors vibrant. 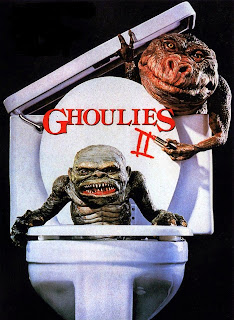 Released in 1988, 'Ghoulies II' features the little imps hitching a ride on the Devil's Den, a haunted house attraction, en route to its destination with the rest of the traveling circus. The Den is run by Uncle Ned (Royal Dano), an old alcoholic that still believes in magic, his nephew Larry (Damon Martin), and Sir Nigel Pennyweight (Phil Fondacaro). One night, Uncle Ned discovers the demons in the Den and tries to stop them with a spell, but is killed before he can finish the incantation, leaving it up to Larry, Sir Nigel, and Nicole (Kerry Remsen), a belly dancer and object of Larry's affection, to stop the fiendish little demons from wreaking havoc and killing the carnival patrons.

While not quite as good as the original 'Ghoulies,' it features a lot better characters in the sweet, but sad Royal Dano, and the stealer of the show, Phil Fondacaro, whose Sir Nigel is classically trained in Shakespeare, and his every line is delivered with believable flare and emotion. The Ghoulies themselves were also updated with a cleaner look and are shown much more than the previous film. They also perform more action and even have a few stop motion animation moments. However, my personal preference is for the original puppets, but that's just me. 'Ghoulies II' is presented for the first time in 1080p, and is just a little better looking than 'Ghoulies I.'

This is yet another solid entry from Scream Factory that should be on every 1980's horror fan's shelf. Order Here
Posted by Jon Wamsley at 9:59 AM