PHANTASM 4K REMASTER IS ON THE WAY 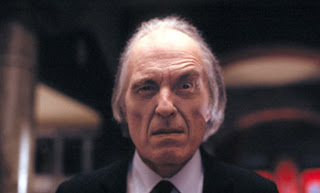 Yes, you read that title correctly, Phantasm got the 4K treatment and premiered at AICN's (Ain't It Cool News) BNAT (Butt-Numb-A-Thon), along with some new footage from Phantasm: RaVager.

I'll give you all a chance to change your undies and catch your breath...


In case you didn't get to see the leaked 4 minute 37 second Phantasm: RaVager trailer, or you DIDN'T read my RaVager Article: when Reggie faces off with the Lady in Lavender, he starts having flashbacks to when she killed him in part 1. You know: Reggie comes out of the Morningside funeral home amidst the windstorm after he shut down the space gate (or dimensional fork). He encounters the Lady in Lavender on the ground, cradles her, then she stabs him and turns into the Tall Man. The footage looked amazingly clear, meaning it was given some sort of hi-def treatment, which made me believe that a blu-ray was on the way at the very least. 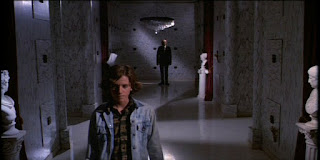 As it happens, J.J. Abrams was not content enough merely working on what is going to be the biggest film of the year, Star Wars: The Force Awakens. He probably sat around one day in the Millenium Falcon and said, "What else can I do with my genius?" After realizing he's J.J. "Fucking" Abrams, he decided to take his love of Phantasm to the highest degree and, along with Bad Robot, he took on the arduous task of remastering Phantasm in 4K from the original negative, and from the 2 stills courtesy of AICN below, it is pants-messingly wonderful. Personally, I had no idea J.J. was that big a phan. Sure, Captain Phasma, the chrome Storm Trooper, was named and designed based on Phantasm and the silver sphere, but to take on remastering the film in 4K, he's a phan of the highest caliber.

Below are the 2 stills from AICN from Phantasm 4K, and I took the liberty of comparing them to virtually the same frame from the 1999 MGM DVD release of Phantasm. The 1999 DVD still shows that the picture was very saturated with a lot of red overtones. If you look closely, you can see bits of the set reflected in the sphere. In the 4K still, the tones are dialed back to a more neutral, natural look, and what is reflected in the sphere is less noticeable. 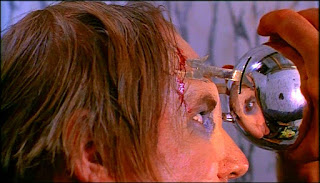 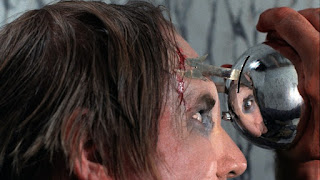 The below stills show a large contrast. In the 1999 DVD, when the gang open up the door to the space gate, the whites are blinding and almost blown out. On the 4K still, the whites are brought down and more details of the wall and their clothing are presented. 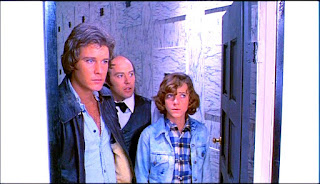 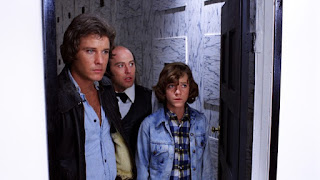 We're through the looking glass here, people, and I likes what I sees. No release date is set.