RAGE OF HONOR, OR SHO ME THEM GUUUUUNS! 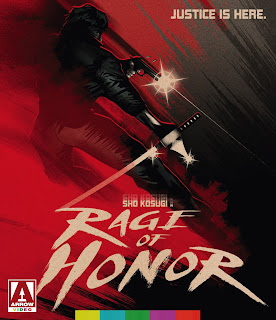 Released on March 15th from Arrow Video is their 2nd Sho Kosugi film, Rage of Honor, in which Kosugi plays a DEA officer whose partner is killed in an explosion during a solo drug investigation that also destroys a bunch of evidence. Bound to his Eastern ways, Kosugi quits his job and heads to Buenos Aires to seek his revenge, but at what cost? 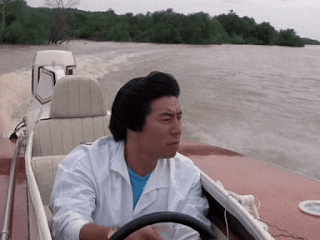 The films of Sho Kosugi are not considered good; insanely fun, mindless action, but not "good." I enjoy the hell out of them, but let's call a spade a spade. The average fan didn't wander into the action section of the video store looking for Fellini Satyricon.

Rage of Honor isn't one of Kosugi's best films, but there is still a lot fun to dig on. The opening sequence that features racing boats, ninja stars, and explosions is enough to keep you hanging on. At one point near the beginning, Kosugi is doing some uneven bar moves outside of a hotel, and at one point it becomes painfully clear that Kosugi has undergone a transformation into a caucasian with a bad wig. Remember that scene in Breakin 2: Electric Boogaloo when Turbo falls down all those steps, and it is blatantly not Turbo? Yeah, it's like that. Or remember the diner brawl in I'm Gonna Git You, Sucka when Ma Bell (Ja'net Dubois) turns into the white dude with the mustache and the fro? That was done purposefully for comedic effect. The stunt in Rage of Honor was not. There is also a part when Kosugi is facing off against a jeep, which is driving towards him. Sho flips up in the air and throws a grenade into the jeep causing it to crash and explode. Only thing is, when he throws the grenade, you plainly see it bounce off the ground, then the film cuts to the grenade falling onto the floor of a jeep. These are the things that make a movie fun. 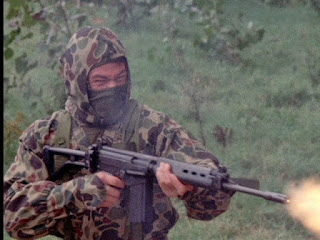 Although there is a Ninja showcased on most of the posters and video boxes for Rage of Honor, Kosugi does not don the outfit for which he is most famous. He also doesn't use much in the way of Ninja weapons outside of throwing stars, of which some are modified to explode and look technologically advanced for the 80's having a digital display. He uses a sword a couple times and some wrist blades (don't know the proper name for them), but mostly he opts for guns, which is cool, but turns Kosugi more into a Chuck Norris type player.

Arrow Video gives Rage of Honor a clean 1080p transfer with good, vibrant colors, clear audio, and a decent amount of extras, including part 2 of Arrow's extended interview with Sho Kosugi, entitled "Sho and Tell." Even that is almost worth the price of the disk itself. All Sho Kosugi fans are going to want to grab Rage of Honor. 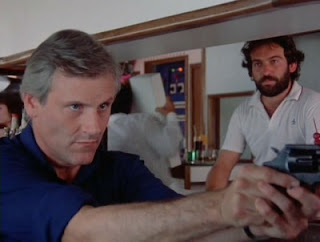 "Following his star turns in '80s actioners Enter the Ninja and Revenge of the Ninja, Sho Kosugi
continued his domination of the US martial arts movie with 1987's Rage of Honor - helmed once again by Pray for Death director Gordon Hessler (The Golden Voyage of Sinbad). Federal agent Shiro Tanaka (Kosugi) used to live for his job - now, he lives only for revenge. When his partner is killed during a bungled drug bust, Shiro throws away his badge and the rule book with it: arming himself with an array of deadly weaponry - including nunchucks, blades and ninja stars - he sets out to Buenos Aires to settle the score with the bad guys. Packing explosions, flying kicks and somersaults aplenty (as well as some truly logic-bending stunt sequences), Rage of Honor sees Kosugi at the top of his game as he battles his way from the streets of the urban jungle to the very literal jungles of South America."