AT MIDNIGHT, OR ON HIGH HEELS, DEATH WALKS TWICE 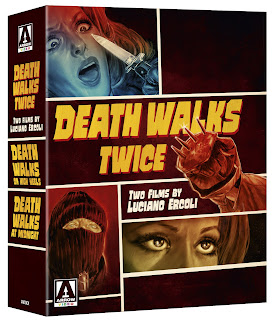 GIALLO FANS REJOICE! This past week, Arrow Video graced us with a double dose of giallo in Death Walks Twice: Two Films By Luciano Ercoli, featuring Death Walks on High Heels (1971) and Death Walks At Midnight (1972). 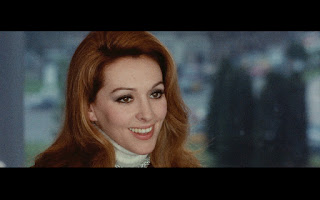 The film opens with a one-eyed man on a train getting his throat cut and his bags searched through by the killer, who has bizarre blue eyes. Nieves Navarro (credited as Susan Scott) stars as Nicole, a strip-tease artist that works local clubs around the city. Her boyfriend, Michel (Simon Andreu), is an unemployed drunk who truly loves Nicole, but leeches off of her all the same. Nicole starts receiving phone calls from someone using a voice changer looking for jewels that her father stole, but she knows nothing about them and irately shrugs them off.

There is also a man that has been frequenting her shows, and one night, he sneaks into her dressing 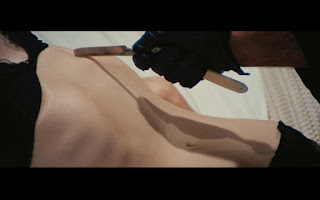 room and introduces himself as Dr. Robert Matthews (Frank Wolff). Rather than being shocked, Nicole only smiles and entertains her fan and is pleased with the red roses he brought her. Soon after he leaves, Nicole receives another phone call threatening her life. She rushes home to find a very drunk Michel, who happens to be in a particularly self-loathing mood and verbally abusive. After he stumbles out of her apartment, the Killer sneaks in through the window and attacks Nicole. He lays her down on the bed and with her shirt over her head, he rubs the flat side of a straight razor all around her body, making her think he is cutting her. When the Killer leaves, she rushes over to Michel's, but runs into Dr. Matthews again who tells her where he is staying and gives her a card with his number. 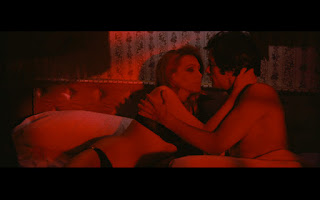 Once at Michel's, he is very apologetic, she tells him what happened, and he comforts her. Later, she goes into his bathroom, reaches into the medicine cabinet and knocks something into the sink, which happens to be a pair of bizarre blue contacts that the Killer wears. She runs out and the next day she meets with Dr. Matthews and makes him take her away with him to London, but has Nicole escaped from the blue-eyed masked Killer, or only moved closer to him or her?

Death Walks on High Heels is a decent giallo with excellent plot-twists and red herrings. Nieves
Navarro is charismatic, funny, and beyond sexy. Frank Wolff plays the part of the seemingly naive and lovestruck Dr. Matthews flawlessly. The rest of the cast played their parts well, especially Simon Andreu as the drunken, verbally abusive, yet albeit caring, Michel. 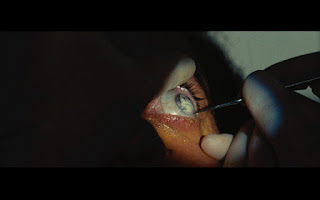 One notable scene is when Dr. Matthews is doing eye surgery in which he cuts the top layer of the lens and it'll make your skin-crawl. It is unknown if that was actual eye surgery or not, but if it was not, then it was a pretty great effect. Another is Nicole's first strip scene was done with her wearing blackface and a wig, but back in the early 70's this wasn't nearly as taboo as it is today. Luciano Ercoli's masterful eye and style kept Death Walks On High Heels and Death Walks At Midnight sexy, but not sleazy.

The Arrow treatment of a 2K conversion from the original negative is very well done and really makes the colors pop, especially in the scene just after Nicole is attacked for the first time and rushes to Michel's apartment. The scene is lit completely red and the 2K conversion makes it very deep and lush. The audio is presented in its original mono audio and uncompressed PCM on the blu-ray discs. 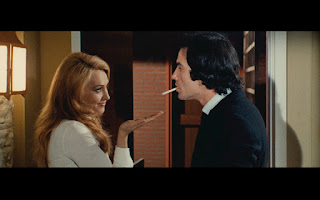 This one, once again opens with the beautiful model, Valentina (Nieves Navarro), who has agreed to take an experimental drug and have her experience recorded and photographed by Gio Baldi (Simon Andreu), who works for a local newspaper and promises her face won't be shown. During her hallucination she sees a Woman viciously murdered by a Man wearing a spiked gauntlet in the apartment across the street.

Later the story is published, not in a reputable newspaper, but in a tabloid with her face uncovered. Valentina furiously confronts Gio, breaking his front office window with a rock and is arrested. At the police station she meets with Inspector Serino (Carlo Gentilli), who doesn't believe a word of the story.

She comes home to her friend/lover, Stefano (Pietro Martellanza), who gives her a little bit of the 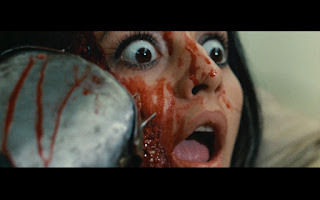 business for taking part in the phony experiment. She changes her clothes and gets a note to meet someone in the apartment across the street. When Valentina gets there, she finds the place completely empty. She goes out on the balcony and sees her apartment across the way and Stefano relaxing on the couch. She tries to get his attention, but he can't hear her. She goes to leave and suddenly, the Killer with the sunglasses shows up. She closes the door on him, but he punches a hole through it with the spiked gauntlet. She catches Stefano's attention and he comes running. When he gets there, he tells her he didn't see anyone. While they are talking, the Killer slips away. Downstairs, Gio is questioning the doorman when Valentina and Stefano walk down. She speaks to the Inspector again, but he still does not believe her, so Valentina must figure things out for herself, and hopefully not get killed in the process. 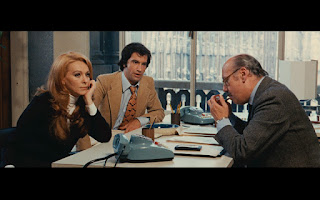 Arrow did another great job with the 2K conversion with a clean picture and vibrant colors. The audio is presented in its original mono audio and uncompressed PCM on the blu-ray discs.

Any fan of Giallo is going to want to jump on grab this fantastic box set before it sells out.

"Emerging at the peak of the giallo boom of the early '70s, Luciano Ercoli's Death Walks films are two superlative examples of the genre linked by their shared casting of the stunning Nieves Navarro (billed under her adopted stage name of Susan Scott) as the lead woman in peril. In Death Walks on High Heels (1971), exotic dancer Nicole (Navarro), the daughter of a murdered jewel thief, finds herself terrorised by a black-clad assailant determined on procuring her father's stolen gems. Fleeing Paris and her knife-wielding pursuer, Nicole arrives in London only to discover that death stalks her at every corner. Returning in Death Walks at Midnight (1972), Navarro stars as Valentina - a model who, in the midst of a drug-fuelled photoshoot, witnesses a brutal murder in the apartment opposite hers. But when it becomes clear that the savage slaying she describes relates to a crime that took place six months earlier, the police are at a loss - forcing Valentina to solve the mystery alone. Offering up all the glamour, perversity and narrative twists and turns that are typical of the giallo genre at its best, Luciano Ercoli's Death Walks on High Heels and Death Walks at Midnight anticipate the super-stylized trappings of Brian De Palma's early psycho thrillers (most notably, Dressed to Kill)."