BRIDE OF RE-ANIMATOR, OR HOW HERBERT WEST LEARNED NOT TO FEAR GOD, BUT BECOME GOD 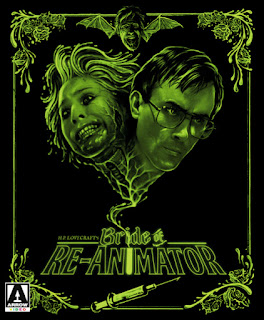 With this past Tuesday's (April 12th) release of Brian Yuzna's, Bride of Re-Animator, and the up and coming release of Larry Cohen's, The Stuff on April 19th, Arrow Video has pretty much been in control of our wallets. I, for one, was pretty excited to receive Bride of Re-Animator because, I've never seen it the whole way through; IFC showed it around Halloween, but I only caught bits and pieces...(pause for laughter). 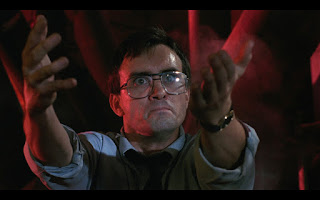 Bride of Re-Animator is tonally different than Re-Animator due to Brian Yuzna directing and not Re-Animator had its humorous moments, but there is a lot more in-your-face humor in Bride of Re-Animator, especially with West's little "side projects" like, the arm connected to the leg that attacks him, the hilariously fake dog with the human arm gag, and Hill's head having batwings attached so that he can comically fly around.
Stuart Gordon.

The film is also a character study of West's tenuous "friendship" with Dan, who appears to only stick with West because of the events of Re-Animator, not friendship. Deep down, West believes that Dan is his friend probably because, he's never had a friend. When Dan is having sex with Francesca (the (insert adjective here) hot Fabiana Udenio), or when he shows affection towards Gloria (the sexy-even-when-sickly, Kathleen Kinmont), West is visibly jealous and then tries to disrupt the situation. When West proposes the creation of the Bride, Dan is ready to leave, but West pulls him right back in when he manipulates Dan with the use of Meg's heart as the centerpiece of the Bride. 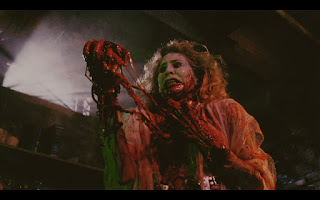 West had a bit of a God complex in Re-Animator, but in my opinion, it had more to do with proving his theory and the effectiveness of his re-agent. In Bride of Re-Animator, West is out to prove he is God/better than God. As evidenced in his final speech, West talks about God rejecting his own creation, and he in turn rejects his creation when she favors Dan over him. West's creation, that he marveled at not a minute ago in the film, is now "just a collection of parts," making him a pretty fickle God.

Though Bride of Re-Animator is more comedic than its predecessor, that doesn't detract from the effectiveness of the actors. Bruce Abbott plays it pretty straight and serious and is the easily manipulated moral compass, Jeffrey Combs is superbly over the top, Fabiana Udenio was mesmerizingly gorgeous, and Kathleen Kinmont was a great homage to The Bride of Frankenstein. 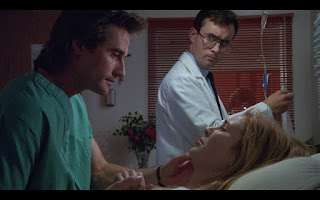 Arrow Video's treatment of Bride of Re-Animator nothing short of stellar, and one of their best to date. The 2K transfer is flawless presenting lush colors, and even though the restored deleted scenes in the uncut version are a bit darker, they are free of distracting artifacts. The audio is presented in the original 2.0 stereo and sounds great. There are a ton of special features to go along with this killer release such as deleted scenes and 3 audio commentary tracks: one with Brian Yuzna, one with Jeffrey Combs and Bruce Abbott, which is a riot, and one with the special FX team. It is on one of these commentary tracks where the scrapped idea of Herbert West vs the Tall Man of Phantasm is discussed. There is also a behind the scenes doc that was shot on video by the guys of KNB showcasing alternate takes and FX creations (see full list below).

Bride of Re-Animator from Arrow Video needs to be in everyone's collection, so hurry up and grab the limited special edition while you can HERE! 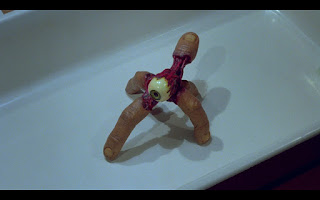 "The success of Stuart Gordon’s hit horror-comedy Re-animator meant that a sequel was all but inevitable. The resulting follow-up, Bride of Re-animator – this time helmed by director Brian Yuzna (Society, Return of the Living Dead 3) – would prove that there was a good deal more life left in the story of Dr. Herbert West and his ghoulish exploits.

It is 8 years since the Miskatonic massacre. Unperturbed by the disastrous outcome of his previous meddling with the dead, Dr. West (again played by Jeffrey Combs) continues his research into the phenomenon of re-animation; only this time, he plans to create life – starting with the heart of his young protégé Dan’s dearly deceased, Meg Halsey. Surely nothing could go wrong?

With special effects master Screaming Mad George (the man behind the infamous “shunting” sequence in Society) on hand to contribute a host of characteristically weird and wonderful creations – including zombified bats and a one-eyed finger spider – Bride of re-animator is a more than worthy successor to Gordon’s original cult classic."