THE STUFF - ONE TASTE AND YOU'LL ONLY WANT "MO" 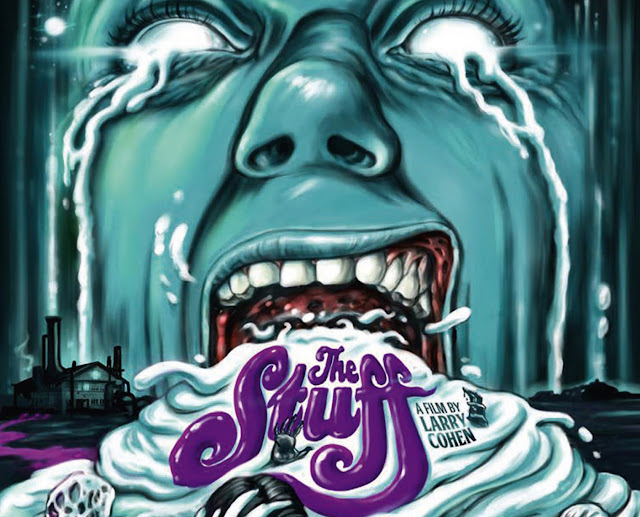 On Tuesday, April 19th Arrow Video released the under appreciated Larry Cohen cult classic, The Stuff, about a mysterious, delicious sludge that bubbles up from the bowels of the earth and is packaged and sold in supermarkets to unsuspecting consumers. 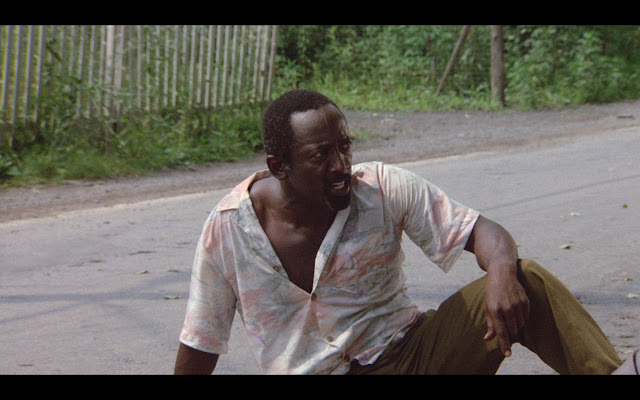 The Stuff is classified as horror, but it is really more of a comedy. The film opens at a quarry where an old man sees some thick, white liquid bubbling up from the ground. Is his first instinct to go get someone in charge because, this could be toxic waste of some kind? Nope. He touches it, smells it, then tastes it. Clearly, the lesson here is always taste stuff you find on the ground, right? 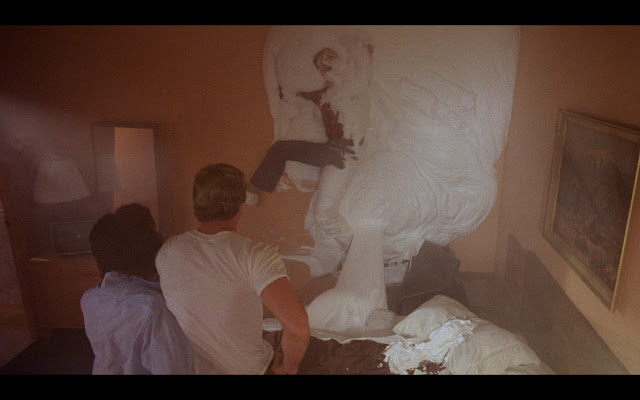 The film is rounded out with some pretty memorable characters: Michael Moriarty plays "Mo" Rutherford, a slick, Southern-fried ex-FBI agent, who is now in the corporate espionage game. He's hired by an ice cream company to investigate The Stuff and along his journey down the rabbit hole, he meets "Chocolate Chip" Charlie, played by Garrett Morris. He and his lethal hands used to be the biggest name in cookies until his company was stolen out from under him by people under the influence of The Stuff. Mo's love interest is Nicole (Andrea Marcovicci), who came up with the sexy and catchy advertising campaign for The Stuff. Along the way, they meet a spunky kid named Jason (Scott Bloom) whose entire family has fallen prey to The Stuff. When things really go south, they turn to Col. Malcolm Grommett Spears (Paul Sorvino), a charmingly paranoid, albeit bigoted, war hero who only wants America to be safe. 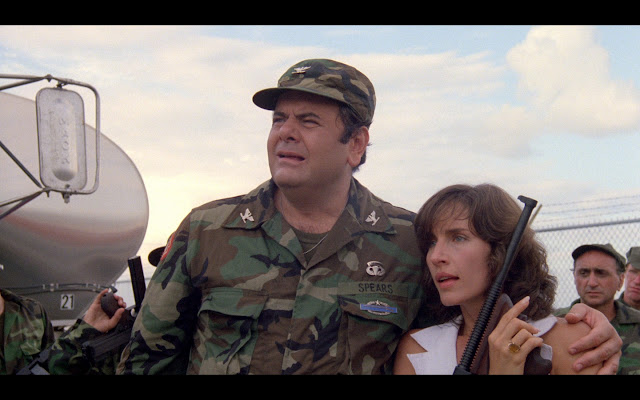 Throughout the film are some commercials for The Stuff, and one in particular shows Abe Vigoda and Clara "Where's the Beef" Peller at a fancy restaurant where she asks, "Where's The Stuff," then the catchy song plays. There is also another commercial that could only have been done in the 80's showing people in tights dancing in the streets and  playing choreographed basketball to the snappy The Stuff tune. When Mo initially meets Nicole, she is working on a commercial/photo shoot with runway models wearing bikinis and fur coats in front of a big, pink The Stuff neon sign looking sexy and eating The Stuff for the camera. 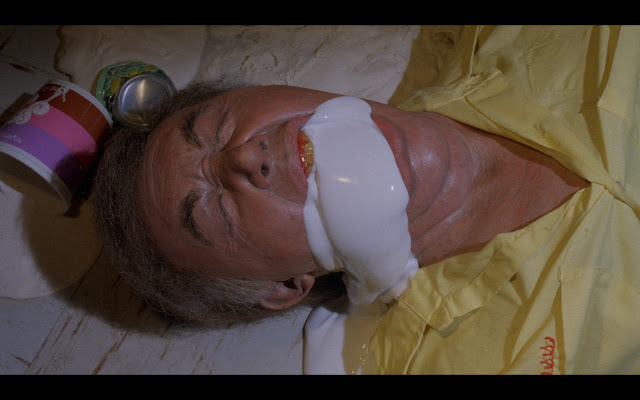 Along with the comedy, there are sprinkles of social commentary. In the special feature documentary, Can't Get Enough of The Stuff, Larry Cohen draws a parallel to the cigarette industry and the fact that they are literally selling people death with ads of people smiling and having a good time. He realized his idea shouldn't be so blatant, so he opted to switch to a product more accessible to everyone and also buy into the diet fad of the 80's. Enter, The Stuff: a delicious, low-calorie dessert that MAKES you lose weight. Cohen made The Stuff ultra-addictive to the point that people were throwing away entire refrigerators of food so they could fill it with The Stuff. 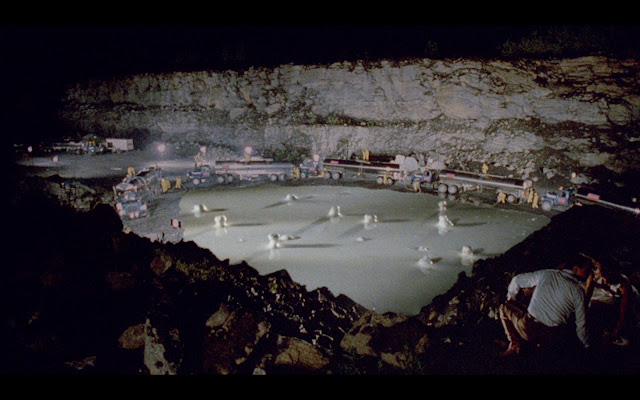 There is another antagonist aside from the malevolent muck: Fletcher (Patrick O'Neal), the head of the corporation that sells The Stuff knowing full well what it does. When the people find out what the stuff does, they destroy all that remains. However, Fletcher, who has now teamed up with the ice cream company that hired Mo, changes the name from The Stuff to The Taste, which only contains 10% of The Stuff offset by dairy products. They lighten the product to make it less deadly, or "non-threatening" as they said in the film. See light and ultra-light cigarettes. 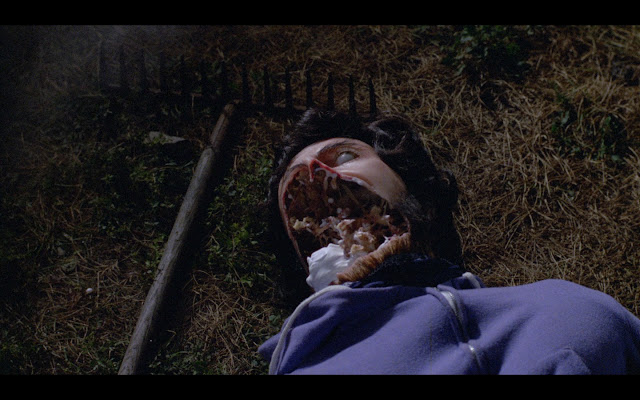 Arrow did another excellent job restoring an enjoyable cult classic. The 2k transfer looks wonderful with vibrant colors. The 2k process even enhanced the less than stellar composite shots, making them even more obvious, which to me, is awesome. I love cheesy effects. The audio is presented in the original 1.0 uncompressed stereo and sounds theater quality. The disc is a little light on special features, but the documentary is pretty cool. 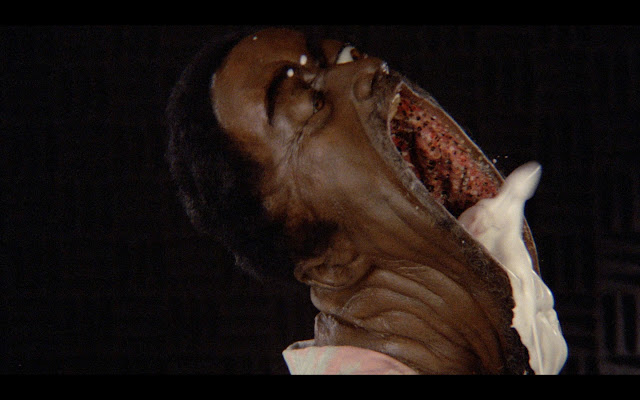 The Stuff is brilliant social commentary wrapped up in a goofy horror comedy that everyone should sample at least once.


Are you eating it ...or is it eating you? The Stuff is the new dessert taking supermarket shelves by storm. It's delicious, low in calories and - better still - doesn't stain the family carpet... What's not to like?! Well, for a start it has a life of its own, and we're not talking friendly live bacteria... Young Jason seems to be the only one who doesn't love The Stuff - in fact he won't go anywhere near it, after having seen the pudding crawling around the fridge one night. What's more, everyone who eats The Stuff has started acting really weird... Now, teaming up with wise-cracking industrial saboteur "Mo", Jason must put a stop to The Stuff and the organization behind it or face a gooey, gloopy demise. Coming courtesy of horror auteur Larry Cohen (director of the It's Alive series and scribe behind the Maniac Cop trilogy), The Stuff is a titillating treat for the taste-buds which blends elements of films such as Street Trash with the straight-up B-movie flavor of The Blob. So grab a spoon and dig on into The Stuff - the taste that delivers... much more than you bargained for!