WOE BE UNTO THOSE THAT RESIST EIBON PRESS

Back in 1999 and 2000, there existed a small independent publishing company called Blackest Heart Media, and they released 2 graphic novel adaptations of Lucio Fulci's masterpieces, The Beyond and Zombie. Both were black and white, came with a copy of the already out of print soundtracks and were extremely limited. Blackest Heart Media closed shop, and the graphic novels are now rare and valuable collectibles. 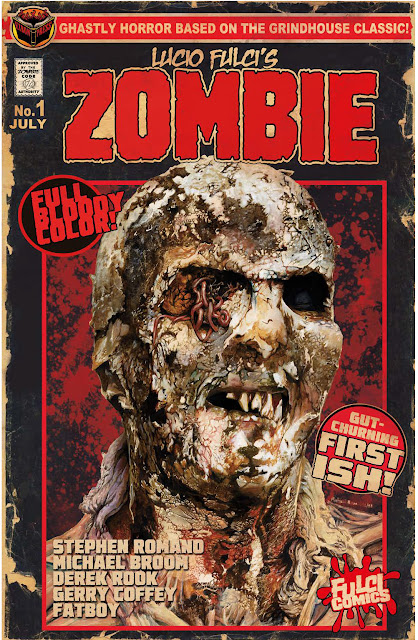 16 years later, Eibon Press is born and bringing Zombie back from the grave in the form of a 4 issue series, The Gates Of Hell will finally go beyond the first issue, and the completely original work of Bottomfeeder, which is like Ferarra's Bad Lieutenant meets Corman's Humanoids From The Deep. 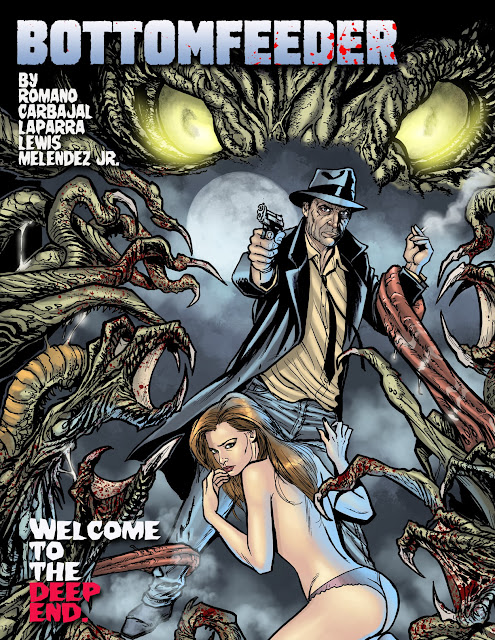 Eibon Press is the all-new publishing brainchild of Masters of Horror/Shock Festival writer Stephen Romano, and horror’s own memorabilia legend and creator of Black Devil Doll Shawn Lewis. Their mission is to “Make owning and collecting horror comics cool again,” by releasing single issue comic books in super limited “Prestige Editions,” which will feature premium printing and innovative packaging never before seen in the history of comics. “Our books are like limited edition record albums,” says Romano. “You know all that awesome stuff they’re doing with posters and vinyl soundtracks at places like Mondo? Well that what we’re bringing to comics. Each and every issue of each and every title will come encased in a specially-designed album jacket-style sleeve which we’ve invented ourselves. We call it the “Eibon Sleeve.” Plus you’ll get some fun extra stuff inside the sleeve with your comic. For example, the first 250 of each 1,000 copy run will contain a signed and numbered bookplate. And we’ll be inserting random awesome stuff in a few of the sleeves like autographed bookmarks and such. What we’re doing has never been done before, and we really hope people will dig all the blood and sweat we’re putting into each issue.” 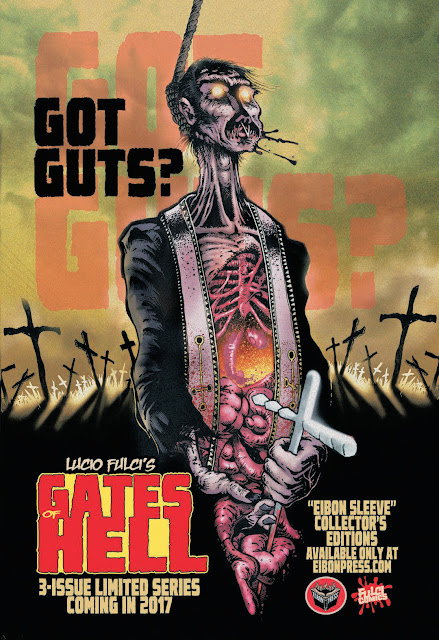 Eibon Press comics are also highly exclusive. As in, they will only be sold at the company website and will not be available in any store. “We were actually about to sign a pretty big co-branding deal with an established publisher to get these books out,” says Lewis. “But Stephen had been down that road before and when we started looking at the numbers, it became more logical to use our own resources to get these books out through direct internet marketing. So we came up with a business model that would allow us to sell a limited number of titles in small print runs through our own website.  Stephen’s been a professional creator of this crazy stuff for decades and I’ve been in the
business of mail order fulfillment for decades, so it was kind of a “duhhh” moment. We figured we’d do this thing ourselves and make the books really collectible and special.” “It’s a lot of hands on work to do it this way,” says Romano. “But it really makes these comic books into instant one-of-a-kind collector’s items. Plus, of course, there’s what actually INSIDE the pages of the books. Which ain’t so shabby, if I do say so.” 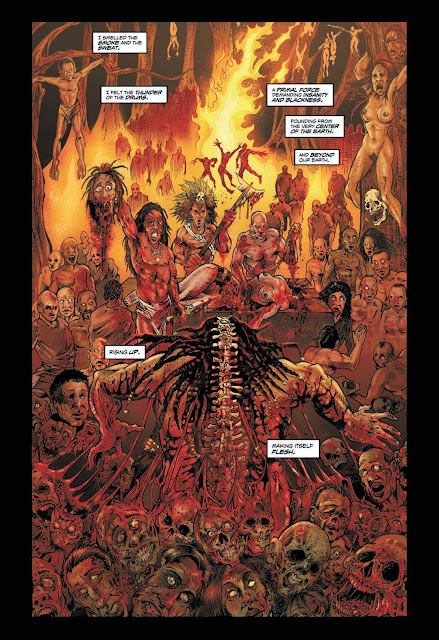 He’s not kidding. In fact, the Eibon Press debut line of FULCI COMICS have been almost 16 years in the making. Having adapted Lucio Fulci’s classic film THE BEYOND in 1998, Romano and Lewis had moved on to several other projects based on Fulci films. This resulted in ambitious graphic novel adaptations of ZOMBIE and CITY OF THE LIVING DEAD (GATES OF HELL). Both projects met with adversity and ended up lost to the four winds . . . but are now being resurrected, like they’ve never been seen before. “Actually, you really haven’t ever seen these comics before,” Romano quips. “Not like we actually wanted you to see them anyway. GATES was never really released in its entirety at all. ZOMBIE had a release, but it was so small and it looked so bad, with the lousy printing and everything. Plus that was like 16 years ago. A lot of people have never even heard
of these things. We wanted to return to these Fulci projects and not only get them really right—but continue the stories beyond the films they are based on.” 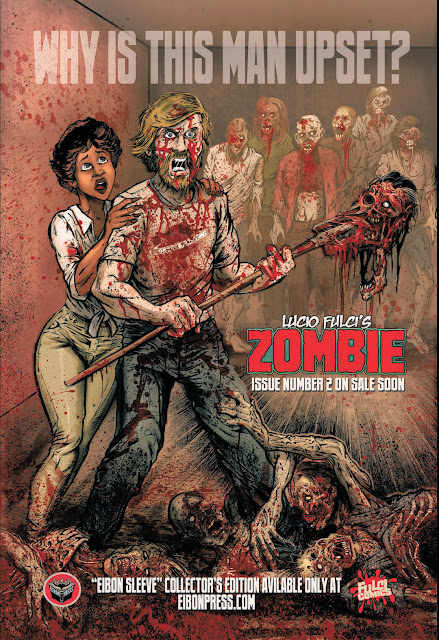 This means that ZOMBIE will shamble ever forward as an ongoing series after the original 4-issue film adaptation is complete. “You’ll see all your favorite characters of course,” says Lewis. “But you’ll also see some new faces. And some faces you thought were dead and buried, too. Stephen’s bringing back Doctor Menard, for example, as a crazy mutated zombie mad scientist monster, working under the insane magic of BIACANDO—the voodoo priest sort of responsible for the zombie apocalypse. But there’s a post modern twist to everything, involving a toxic waste dump and a crazy Army general. It’s just insane stuff. The fans are gonna eat it the fuck up. I mean . . . I’m a fan
and I’m already eating it the fuck up!” 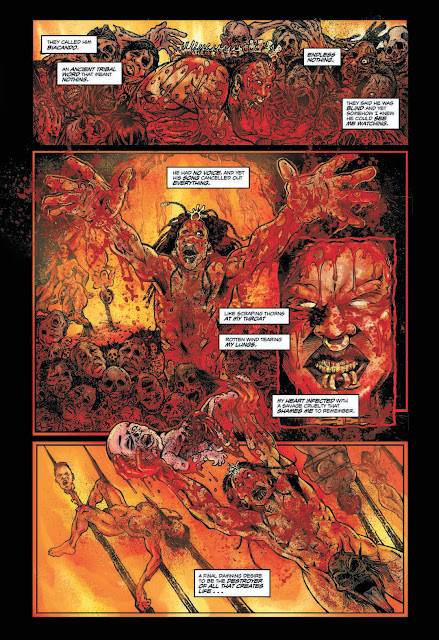 The saga of GATES OF HELL will also continue . . . though Romano and Lewis remain tight lipped about particulars at the moment. “It’s a secret for now,” says Romano. But we have some awesome-wicked stuff coming in the second wave of Fulci Comics. The Saga of the Seven Gates was something we sort of set rolling in 1998, and we may be bringing it to its conclusion soon. Plus we’re working on several other Fulci film licenses. And some non-Fulci film stuff, too. Fans are gonna shit when they hear what’s coming next.” 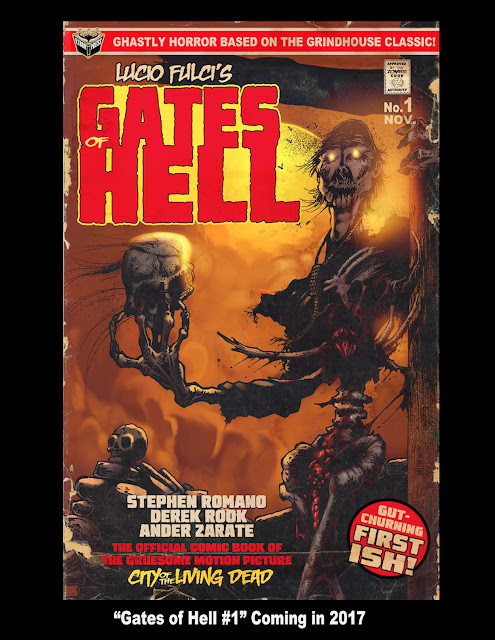 After LUCIO FULCI’S ZOMBIE #1 hits the public in July, the next Eibon title will be THE BOOK OF EIBON, an innovative comic preview magazine, designed to give fans an exclusive taste of everything that’s coming soon. “Because we’re such a small outfit, it’ll take a while to get all the issues of all these books out,” says Romano. “We thought it would be a shame to make the fans wait so long for everything, so we did a deal with Dread Central to get THE BOOK OF EIBON in their monthly Box Of Dread—so it’s totally exclusive to them and damn fucking cool.” 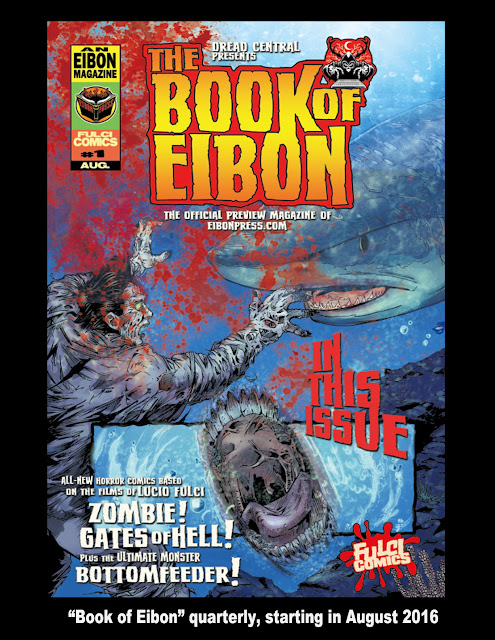 “We’ve got all kinds of nasty in the first issue of EIBON which hits in August, including a GATES OF HELL preview that will knock your dick in the dirt,” says Lewis. “Plus there’s a lot of ink on BOTTOMFEEDER, which is my baby.” 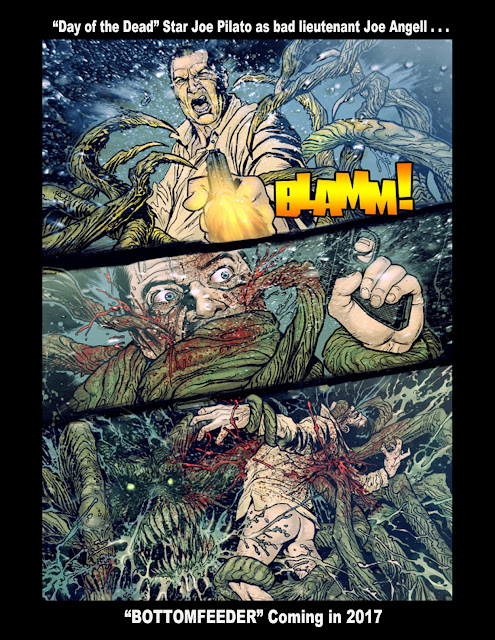 BOTTOMFEEDER is an all-new original horror series, slated for release in 2017, which plays like HUMANOIDS FROM THE DEEP meets BAD LIEUTENANT. It was created by Lewis and Romano in a psychotic collaboration that not only features the most audacious, bloodthirsty, politically incorrect horror scenario envisioned since the gory glory days of the grindhouse 1980s . . . but it also contains a stellar “dream cast” of horror movie legends. 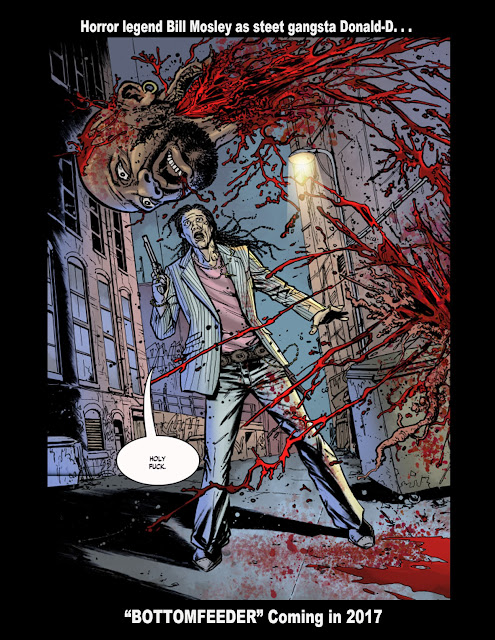 “We originally wanted to make BOTTOMFEEDER as a movie,” Romano says. “So when we decided to make it as a comic series, we “cast it” just like we might have cast a dream version of the film. This means we can have some heavyweight horror stars in there, like Bill Mosley and Clu Gulager, who have both given us permission to use their likenesses... plus we get to resurrect Joe (MANIAC) Spinell and Zoe (MS.45) Tamerlis from the dead. Just wait’ll you see them in our comic. Our artist did an amazing job of bringing them back to life!” 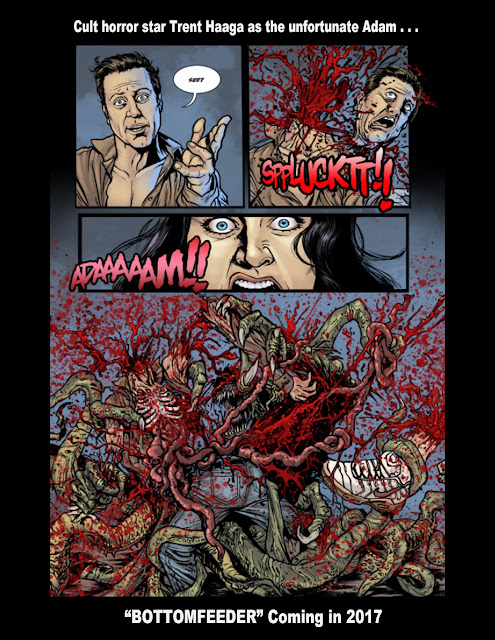 BOTTOMFEEDER will come up for air in 2017. For more info, check out the extended preview at www.bottomfeedercomic.com 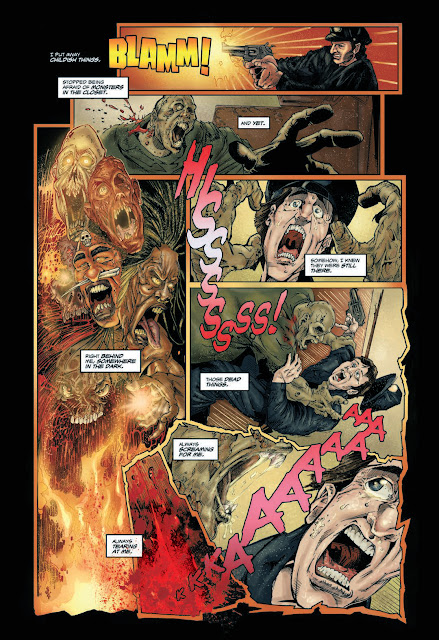 LUCIO FULCI’S ZOMBIE # 1 will be available for pre order on FRIDAY JUNE 10 at MIDNIGHT. 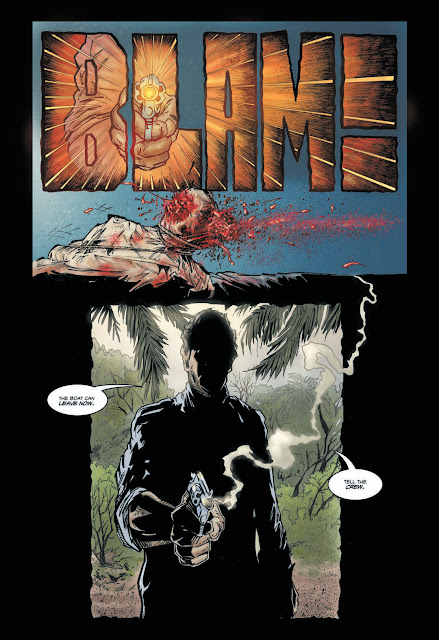 The first issue of BOOK OF EIBON will only be included in August’s specially themed Box of Dread, available at Dread Central. The debut issue will feature the mind-blowing Shark Vs. Zombie preview story from our upcoming Halloween issue of LUCIO FULCI’S ZOMBIE. A limited number of review copies will also be available from Eibon Press. Please get in touch to reserve your copy. THOSE will go fast too. 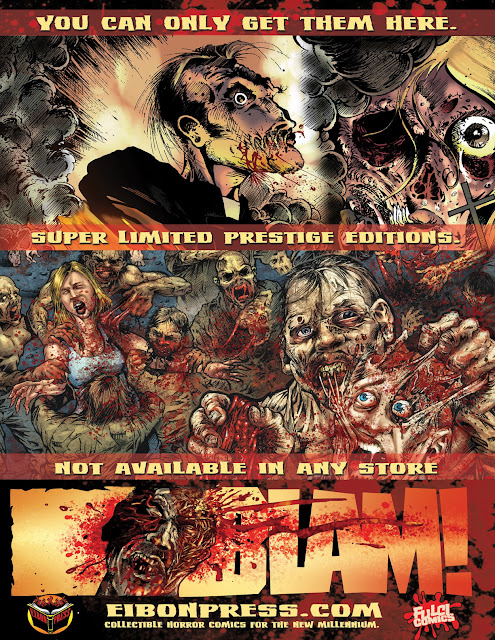 It’s an all-new era of ongoing Fulci Comics, and we’re proud as hell to bring it to you. For more information, keep an eye of our website and our twitter feeds!

Stephen Romano is available for print and blog interviews and radio appearances.

Check out the awesome TRAILER for our ZOMBIE Comic Series: