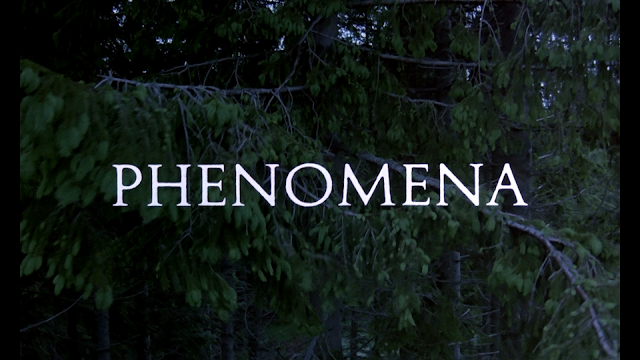 You may be asking yourself: "Of all of Dario Argento's films, why not Suspiria?" I can't lie, it was a toss up between Suspiria and Phenomena for my number 5, and Phenomena edged out Suspiria by the thickness of a fly's wing. 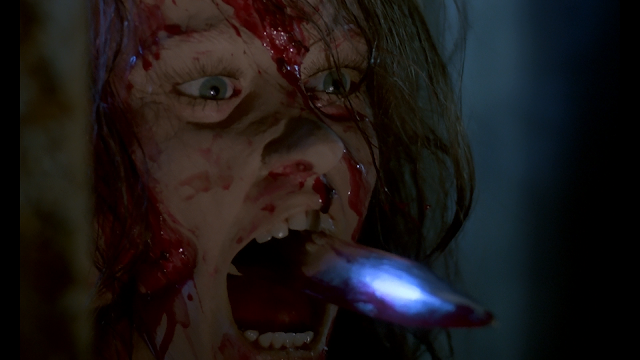 Phenomena is about Jennifer Corvino (Jennifer Connolly), daughter of a famous fictional actor, who is sent to the Richard Wagner Boarding School while he is filming on location. On the surface, it seems like a fairy tale setting, but looks can be deceiving. During a sleepwalking incident, Jennifer witnesses a fellow student being viciously murdered by an unseen assailant. After the ordeal, Jennifer ends up at the home of the entomologist, Dr. John MacGregor (Donald Pleasence), where she discovers that she can telepathically communicate with insects. However, the unknown killer saw her and will stop at nothing until the only witness to their crimes is eliminated. 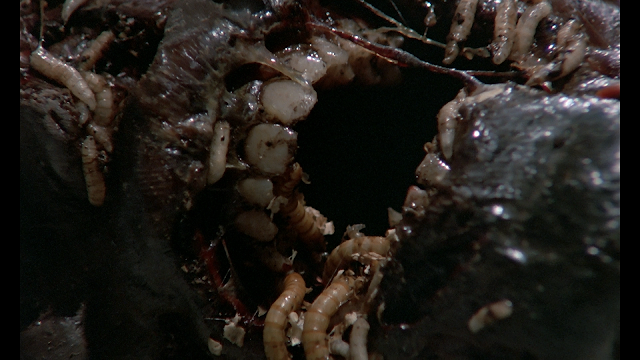 I hadn't seen Phenomena until only a few years ago. The cover looked familiar with the girl holding the bugs, but I had remembered it differently from the VHS days. That cover depicted Connolly with have of her face eaten away and holding the handful of creepy-crawlies; it definitely scared the shit out of me. 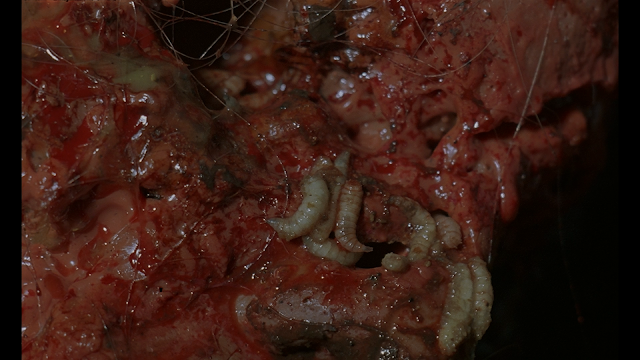 Jennifer Connolly's only cinematic appearance prior to Phenomena was in Once Upon A Time In America, in which she had a small role in a flashback. At the age of 15, she got the featured role in Phenomena and was terrific. It was particularly good because, she was the age of her character, Jennifer Corvino, and could probably relate to the physical and mental changes she was going through. An actress in her 20's most definitely would not have had the same effect. 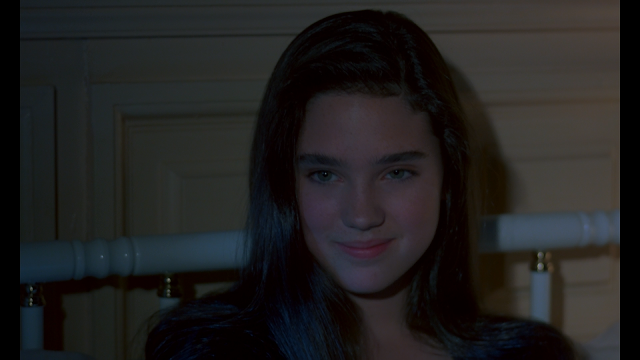 Donald Pleasence turns in one of my favorite performances, outside of Dr, Loomis in Halloween, as the entomologist, Dr. John MacGregor. He's sweet and kind, and a somewhat surrogate father to Jennifer. When all the female students, the Head Mistress, and even her father's agent, Morris, who's responsible for putting her in the school, are against her, she only has Dr. MacGregor. He also acts as mentor helping her realize her powers, albeit briefly, kind of like Professor Xavier, another wheelchair bound, kind, bald, doctor. 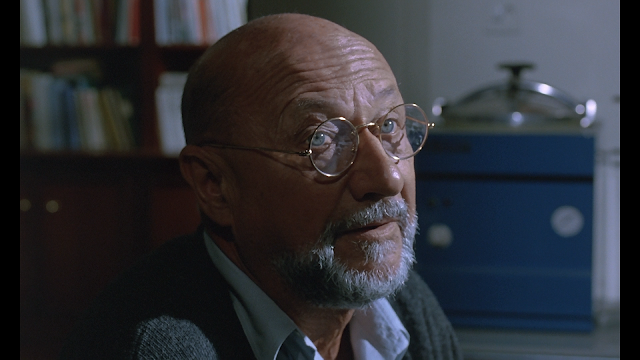 Daria Nicolodi's Frau Bruckner was a troubled woman who was just trying to keep her insane, deformed son safe. She could go from sweet to intense in the blink of an eye. At the time of the filming of Phenomena, her marriage to Dario Argento was in its death throes and she only did this film as a final favor to him. Aside from that, she hated her wardrobe as it made her look a lot older and frumpy, and her death at the end of the film was also a point of contention. It was constant warfare between the soon to be divorced couple, but she turned in a great performance. 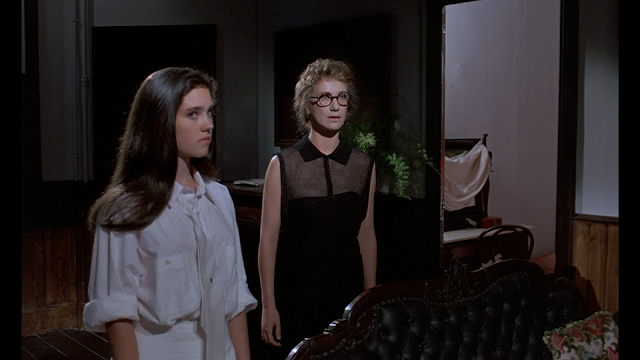 The soundtrack by Goblin and Claudio Simonetti and others is among my favorite soundtracks. It's a synthy dream. The main track, "Phenomena", features a haunting soprano adding a ghostly vocal to the intense synth. The best track, however, was one that wasn't even used in the film: "Jennifer's Friends", which features a good rolling synthesizer accompanied by a groovy, smooth beat, and that same soprano. the closest this came to being in the film was as the bonus features menu song on Anchor Bay's double disc release of the Dario Argento Collection Vol. 2 which came with Inferno. The actual soundtrack disc, of which there are 2 that I know of still in print, the Cinevox version which is JUST Goblin/Simonetti tracks and the Synapse bonus disc, do not include ALL of the tracks. Obviously, they are missing Motorhead's "Locomotive" and Iron Maiden's "Flash of the Blade," but they are also missing some key music from Bill Wyman and Terry Taylor. The very first song in the film is entitled "Valley", which plays over the opening credits and right before Fiore Argento meets her grisly fate. It's a great song, and is a total bummer that Synapse (probably) couldn't get the rights to include it on their bonus disc. 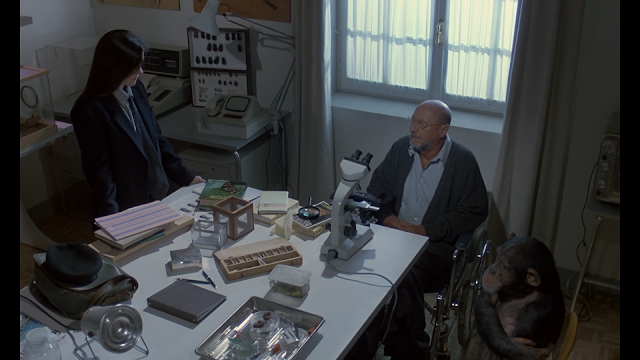 Back in November, Synapse Films finally released their hotly anticipated steelbook edition Blu-Ray of Dario Argento's Phenomena, which was remastered in 4K and includes 3 cuts of the film: The 116 minute international cut, 110 minute director's cut, and the 88-minute US theatrical cut known as Creepers. The set also comes with the amazing soundtrack, featuring 4 previously unreleased additional tracks. Synapse's release took a long time to come to fruition, but the evidence of the painstaking detail and work they poured into the 4K transfer is all up on the screen. The film has never been clearer, nor has the amount of detail been so evident, especially in the amazing, pioneering macro shots of the insects; you can make out individual hairs on the insect's bodies. The sound is also much clearer. 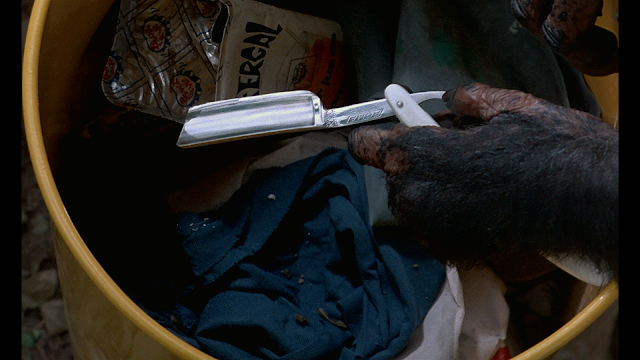 One of the biggest selling points of the Synapse edition was the inclusion of the 86 minute Creepers cut which was the original American theatrical release. Having not seen this version before the uncut version, I can't believe how much of a hack job the editors did. So much character development was cut out and the editing itself was extremely choppy and disorienting, especially when the music starts and stops abruptly. It's no wonder that it didn't do that well in America. One HUGE difference is in the beginning: right after the girl gets stabbed through the mouth with the javelin, you can barely make out the deformed child on the right hand side through the window. In the uncut version, that whole side is either darkened, or the boy was removed and an alternate take was used. 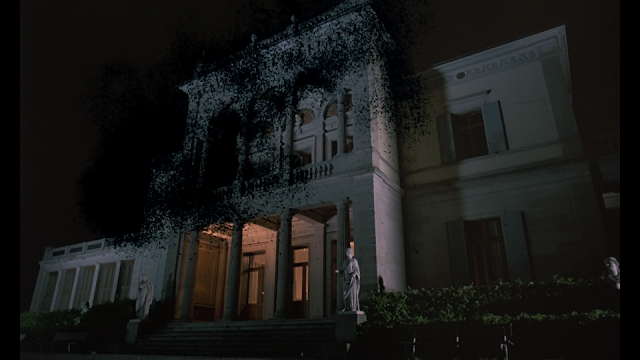 Before Synapse's release, the only blu-ray available was from Arrow Video and the audio they used was a hybrid of Italian/international cut. While the disc was amazing, the Arrow release had its flaws. If you listen carefully, you could hear background sounds dropping out and coming back in because they switched between the Italian and American audio. 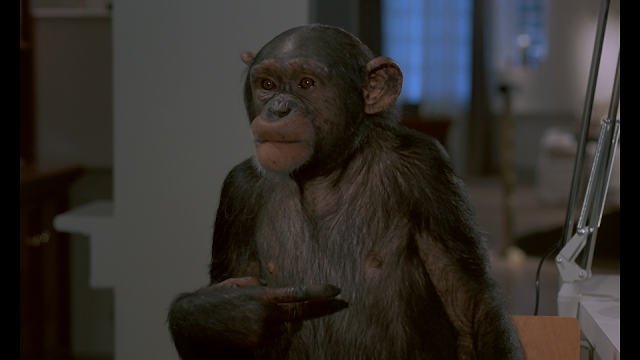 Phenomena really showed Argento's development as a director and writer, as it's his most coherent and well-made effort; even while his marriage to Daria Nicolodi was reaching its ugly, resentful conclusion. While not as stylish as Suspiria, Phenomena is ultimately a better made film that comes with experience. 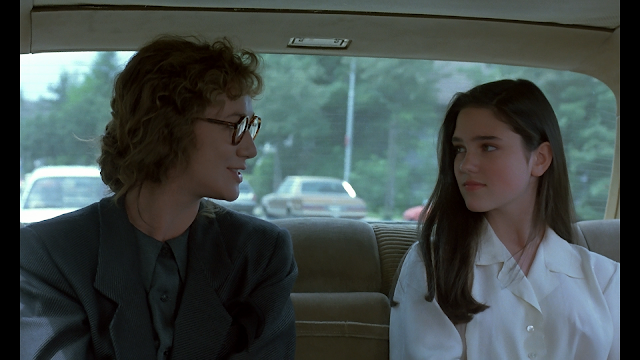 To put it quite bluntly, Phenomena fucking rocks and the Synapse Steel-Book edition, though pricey at $45 USD, is definitely well worth the expense especially to watch this criminally underrated Argento masterpiece in beautiful 4K.