VISIT SCENIC METOOL. COME FOR THE VOODOO, STAY FOR DINNER! 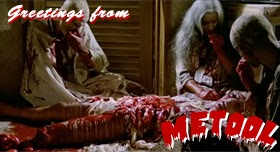 In 1978, George Romero released, what many believe to be his greatest and most poignant film, 'Dawn of the Dead,' in association with Claudio Argento, brother of Dario.

Dario Argento recut Dawn of the Dead for the European market and retitled it as 'Zombi.'

There is a myth in Italian film lore that there was a feud between Dario Argento and Lucio Fulci because, they were the top two horror directors out of Italy.  In various interviews with Dario and Lucio, it was revealed that that was just not true, they were just two guys that made horror.  Argento focused more on story and plot, while Fulci focused more on gore.

In 1980, Lucio Fulci released 'Zombi 2,' titled as such solely to cash in on the zombie craze.  It was retitled 'Zombie' for American audiences, the unofficial sequel to 'Zombi,' but the only real thing the two films have in common were zombies.

While I love and will always love 'Dawn of the Dead,' I prefer 'Zombie.'  Nothing against 'Dawn,' I just like everything about 'Zombie,' its dubbing, the constant deer in headlights look and wooden acting of Tisa Farrow, one of the coolest scenes ever committed to film, the TnA of Auretta Gay and Olga Karlatos, and most of all, the FX by Gianetto de Rossi.  And also, I love that it doesn't have some sort of message about society, and if it does, I was too busy watching A FUCKING ZOMBIE FIGHT A FUCKING SHARK.

To the uninformed, a zombie fights a shark in this film, and it's the single most awesome scene in a horror movie.

The smoking hot Auretta Gay gets basically naked and goes scuba diving to get some photos.  Along comes a big shark, a tiger shark I think, and she takes cover.  When it swims away, she surfaces, finding she is a good distance from the boat and yells to get their attention. She goes back down to hide behind a reef, and out from behind the reef comes a zombie, who grabs her, but she grabs a piece of coral, scrapes it across his face, and gets away.

This was a real guy in zombie makeup wrangling with a real live shark. Even Jaws, the be all end all of shark films, didn't do this shit, and that is why zombie vs shark is the greatest scene ever filmed.  Suck it, Rosebud.

Olga Karlatos plays Mrs. Menard and I just found out, as I'm writing this, she also played Prince's mom in Purple Rain.  Anyways, Mrs. Menard is losing her mind with fear as Dr. Menard refuses to take her away from the island and continues his "research."

Later that night, after a nice shower scene, Mrs. Menard is attacked by a zombie. She tries barricading herself in her room, but a zombie punches through her door and grabs her by her hair.  The zombie starts pulling her towards a large splintered piece of wood.  The editing cuts between the wood, her eye, and a two shot of the wood and her eye, until the wood pierces her eye and doesn't stop until the wood is all the way in there.  She is still alive and screaming when the zombie pulls her through the door.

After Peter and the gang arrive on the island and meet Dr. Menard, he asks them to check on his wife.  They take the car and go to the house to find Mrs. Menard in pieces and three zombies munching on her entrails and organs.  This is definitely the most disgusting scene in the film.

So disgusting in fact that, one morning after a long night of hard drinking, I heat up my extra cheese and black olive meatball sub in the microwave and pop in the Anchor Bay 'Zombie' DVD.  When it got to the Mrs. Menard gut buffet, I just about threw up and had to turn it off, as the meatball sub looked much too similar to her liver. 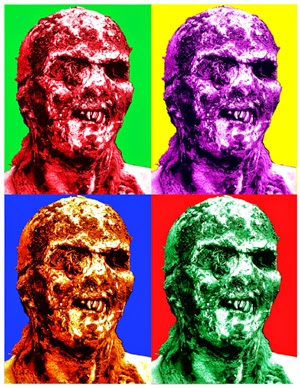 Finally, a few years ago at the last Horrorhound convention that was in Pittsburgh, they had a 'Zombie Reunion,' and if I remember correctly, it was only Al Cliver and Ottaviano Dell'Acqua.  For those of you who don't know the latter, he is the face of the film: the maggoty, wormy eyed zombie that graces the many video covers, posters and t-shirts.  The man is an unknown icon.

I had done an art project where I took the main photo of him and turned it into an Andy Warhol style 4 way portrait, like the Marilyn Monroe he did.

He was one of the last people I met at the convention that day, and I purchased the signature photo of him.  Then I presented a framed version of my picture to him and he thought I wanted it autographed.  I told him that it was for him and he was genuinely touched, as no one had ever given him anything like that before.  He asked me to autograph it for him and I did.  It was truly a special moment for me.
Posted by Jon Wamsley at 10:48 AM