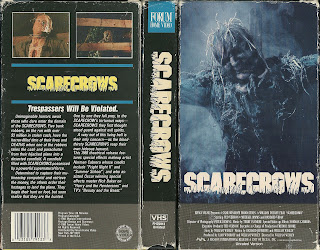 On June 2nd, Scream Factory, in their infinite wisdom, finally gave the world a proper release of William Wesley's 1988 classic, 'Scarecrows,' a delightfully creepy, atmospheric romp about a group of people that have just pulled off a daring heist of the payroll of Camp Pendleton and hijacked a plane for their escape. While in mid-air, Burt (B.J. Turner) betrays the group, setting off a smoke bomb and jumping out of the plane with the money into a seemingly deserted field, but not before leaving the crew a goodbye grenade. 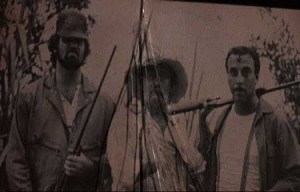 Once on the ground, Burt finds himself surrounded by unusual looking scarecrows and a house not too far away with a truck. Over the radio, Burt is informed by his former partners that the grenade didn't do the job and they are on their way after him. Burt goes in the house that has been abandoned for some time and finds it is not the most inviting place. He finds the key to the truck hanging on a nail that had a fly swatter hanging on it when he walked in next to a picture of 3 men, the Fowlers. He gets in the truck and tries to make his escape.

Meanwhile, Curry (Michael David Simms), Jack (Richard Vidan), and Corbin (Ted Vernon (also the executive producer)) have parachuted to the ground and are on a search and destroy mission for Burt, leaving Roxanne (Kristina Sanborn), and the pilot, Al (David James Campbell) and his daughter, Kellie (Victoria Christian) circling the area in the plane.

Burt locates the money near 3 big empty I-beam crosses, loads it on the truck, and drives, but the truck stalls a little ways down the road. He opens the hood and finds there was never any engine to begin with. What the hell is going on? While dragging the crate of money, Burt finds himself amidst a bunch of Scarecrows that start talking to him in the distorted voices of Curry and Jack and starts firing blindly at the Scarecrows. He starts begging for his life. Curry and Jack can hear him over the radio and wonder who he is talking to. Just then a Scarecrow appears and dispatches Burt. 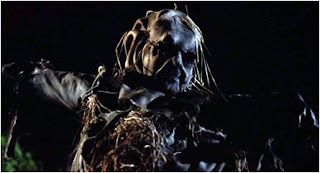 Curry, Jack, Corbin, and Roxanne with Kellie as a hostage all meet at the Fowler house and continue to look for Burt and the money all while trying to avoid the murderous scarecrows that guard the home leading to a gruesome, explosive finale.

Let's be clear: 'Scarecrows' is not a "great" film. There are plot holes and it's a little too short at just 83 min, but this is a classic 80's low budget film that has good scares, good effects, fun acting, great costumes and an even better location. Had 'Scarecrows' a larger budget, I would've liked to have seen more about the Fowlers and why they opted to become, or were cursed to become scarecrows, but at just $425K, the director had to stick to the meat of the story and explain the rest with dialogue from the Robbers, who were making their best guess. 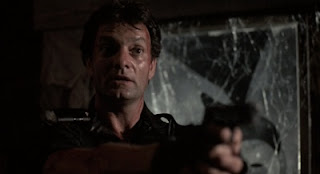 The Robber characters are very well-acted, especially Curry because, I feel like they were out to cast Joe Pilato for the part, but he wasn't available, so they cast his doppelgänger, Michael David Simms. In reality, I'm sure that wasn't the case, but this guy was real similar to Pilato's Capt. Rhodes from 'Day of the Dead' in his intensity and line delivery. When the shit really hits the fan and Curry begins to crack, his fear is so believable that you almost feel sorry for him. Especially his "Guns don't work," line: it's not groundbreaking dialogue, but the delivery is some of the best in the film. His best friend, the nice, kind of dimwitted, Jack, is a good contrast to Curry's toughness, and when he meets his end, Curry gets frantic trying to look for him. Even though he talks down to Jack, you can tell he cares about him, like George and Lenny from "Of Mice and Men." Corbin is the brute of the group, but has a good heart when he opts to bury Kellie's Dad rather than look for the money. Finally, Roxanne is greedy until the very end. When Corbin begs her to go to the plane, she follows the trail of money that leads to her dead end. 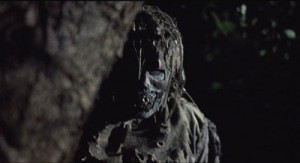 Scream Factory does an excellent job on the blu-ray transfer, as the picture is the clearest I've ever seen, and a lot of dim scenes can be made out better, like the room with the crucified crow, or the wind chime made out of crow beaks.


Horror fans, it's time to stop waiting and grab this must own Blu-ray Scream Factory here.