CONTAMINATION, OR GREEN EGGS AND HAM-ACTING 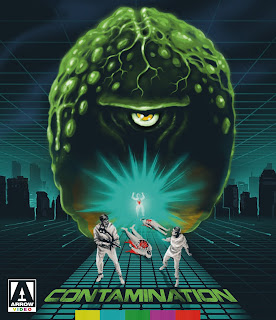 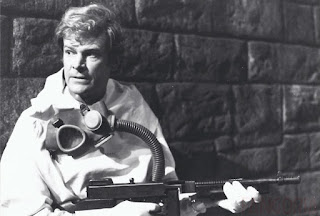 On July 7th, the Luigi Cozzi classic, ‘Contamination,’ makes its world premiere on Blu-Ray/DVD combo from Arrow Video. The film opens with a mysterious boat without a crew careening into a New York harbor. When it is finally stopped, New York detective Aras (Marino Mase) boards the ship with a Medical Examiner and other fodder to investigate. They discover the badly mutilated bodies of the Captain and his Crew, whose chests appear to have exploded from the inside. In the bowels of the ship, they find crates and crates of coffee marked with a strange “X.” One of the crates has spilled its contents, which look like giant avocados. One has rolled under some steam pipes and has grown larger than the others and is pulsating. With absolutely no regard for safety, one of the investigators picks it up and it explodes, spraying a few investigators with a green bacteria, not unlike an acid, which burns their skin and causes their chests to expand and explode in extreme slow motion.

After the military takes over, Colonel Stella Holmes (Louise Marleau) interrogates an isolated Aras, who is pretty unhappy with his current treatment, but she gruffly demands his cooperation. She has all the eggs on the ship frozen and the already exploded egg is brought back to the “futuristic,” (meaning covered in buttons and hexagons,) lab and its contents are tested on a rat that explodes almost immediately. Stella and Aras track the destination of the eggs to an import/export company, 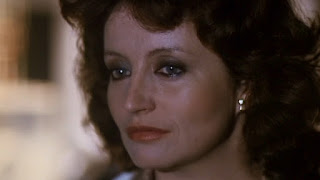 where the workers open fire, and when they find the workers find they are out numbered, shoot an egg, and ultimately kill themselves. The origin of the eggs are traced back to a mission to Mars by astronauts Ian Hubbard (Ian McCulloch) and Hamilton (Sigfried Rauch). After a battle of words, Stella recruits Hubbard when she apologizes discounting his story of what he saw on Mars.

Together, Stella, Aras, and Hubbard go on a mission to South America to save the planet from a horrible extinction at the hands, or tentacles, of a creature from beyond the stars. 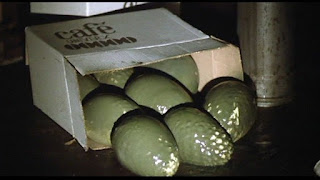 ‘Contamination,’ like a lot of cult films, is both brilliant and a bit daffy. For a viewer to take this film seriously would be doing it a great disservice, as the film was written just serious enough to not be a full blown comedy. Luigi Cozzi himself admits this much. For instance, the sequence where Stella is locked in her bathroom with a seemingly-about-to-burst egg is too long and silly, as she goes from a ball-busting colonel to a daft damsel in distress. The banter between Hubbard and Aras is priceless as they keep changing their minds whether to check in on Stella. Also, there is a lot of faith put in the protective suits, especially by the people cultivating the eggs, even though if an egg happens to burst, they are as good as dead. One of the best parts of the film is when Hubbard and Stella are yelling at each other and she calls him “half a man” and he slaps her hard. To be honest, she had that coming, especially because she made him out to be crazy in front of a panel of top military advisors. Another great McCulloch moment comes in the form of him saying, “I don’t know what Mars is!”

They call this an ‘Alien’ ripoff, and while it admittedly borrows influences from ‘Alien,’ ‘Contamination’ is not a ripoff. The only real things the two films have in common are the eggs, and reaching a bit, the cave where the eggs were found does slightly resemble the derelict ship from ‘Alien.’ However, that’s where the similarities end. While it’s no secret that this was a chance to cash in on the success of ‘Alien,’ ‘Contamination’ is a very different film. You want to see a true ripoff: find ‘Great White,’ aka ‘The Last Shark’ on youtube and you will get the definition of ripoff and be entertained at the same time. ‘Great White’ is amazing!!! (Get on that, Arrow) 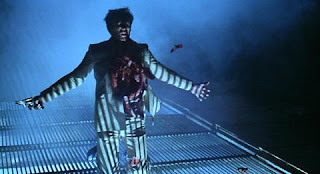 This is yet another ‘Video Nasty’ making its way to Blu-Ray, and it looks and sounds remarkable. Yes, there is some film grain, but I’d be disappointed if a film from the 1980’s didn’t have any film grain. The eggs look like the classic avocado green, from the 70’s, you know, your grandma probably still has a fridge that color in her basement, and let’s be honest, it fascinates the hell out of you. The Cyclops, though virtually static, is still an impressive effect just based on its size.