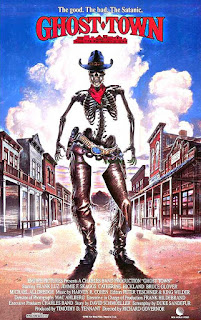 The kind folks over at Scream Factory have finally released Richard Governor's 'Ghost Town' to Blu-Ray on July 28th 2015. 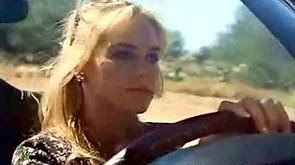 Kate Barrett (Catherine Hickland) has just run out on her wedding and fled into the desert. She casts off her wedding dress with a laugh when she finds her path blocked by a downed phone pole. She turns down a dirt road and starts to hear sounds of hoof beats behind her. She stops and gets out of the car, frustrated and scared. Suddenly a sand storm kicks up, but it carries more than sand and pebbles. A sinister black-clad cowboy on a black horse takes her away screaming.


Enter Deputy Langley (Franc Luz) practicing his quick draw skills with a large gun in a junk yard, listening to what sounds like Sammy Hagar. When he removes his headphones, he hears his boss, Bubba (Michael Allderidge) calling for him. They meet at the site where Kate's car was left stranded and Bubba gives Langley the low down on what happened. 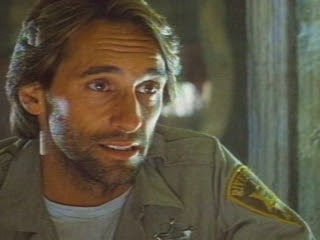 After Bubba leaves, Langley notices the hoof prints in the sand and follows the trail. A little ways down the road, he stops when he sees what he thinks is a man in black on a black horse, but it fades away like a mirage. Suddenly, the mirage becomes all too real when the man on the black horse rides towards Langley's car shooting his gun. When he passes, Langley gets out of the car, shotgun in hand, but no rider. He calls for help, but his car suddenly bursts into flames, leaving Langley to wander through the desert for some kind of civilization.

Langley happens upon a dilapidated windmill and pierces his hand on an out of place nail on one of the remaining blades. He looks down and sees a fallen headstone when a pair of skeleton hands reach up and grab him. Langley pulls back and the desiccated corpse of Sheriff Harper (Blake Conway) rises and tells Langley that he is the one that will rid his town of evil.


Understandably freaked out, Langley runs off and finds a town in the distance. When he gets there, the town is deserted with just a few buildings that are almost falling down. He takes refuge from the coming storm in the sheriff's office, where he is watched by the ghostly inhabitants of the town. The next morning, Langley meets some of Cruz del Diablo's inhabitants: The cryptic Dealer (Bruce Glover (Father of Crispin)), the saloon owner, Grace (Penelope Windust), the Blacksmith (Zitto Kazann) and his girl, Etta (Laura Schaefer). While talking with the Blacksmith, two bandits, Ned (Ken Kolb) and Billy (Will Hannah) try to kill Langley, but he is able to kill them before getting grazed. He wakes up to the beautiful Etta bathing him and they promptly make sweet, ghostly love.

That night, Langley is transported back in time and sees the events unfold that explain why the town exists as it does: Sheriff Harper was after the baddest man in the West, Devlin (Jimmie F. Skaggs), the cowboy in black. When his attempt fails, Devlin crucifies Harper, who places a curse on the town until Devlin is stopped.

As far as I know, 'Ghost Town' didn't make it into theaters, but if it did, it was a very short run. I first saw this on VHS recorded off of HBO in 1989 and the opening credits theme, which is also the opening credits theme from 'Ghoulies II' scared the shit out of me. It was like nothing I'd heard before, but being that I was only 8 years old, my knowledge was somewhat limited. The film didn't really scare me beyond that, but it was all around good: good story, good action, and good characters. 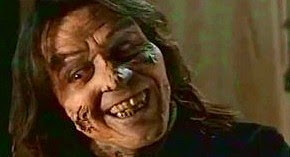 The acting was a lot better than expected and the performances still hold up today. The show stealer was the main antagonist, Devlin (Skaggs), who's yellowed, decomposing features added to his sinister nature. He also had a deep, villainous laugh that could chill you to the bone. Devlin was also the only "living" character that looked dead; No one else had any kind of prosthetics or augmentation to make them appear dead, but what is strange is that Devlin never "died," so why would he look like that? The answer is: Who gives a shit! Devlin looked amazing and is one of the best villains ever in a cult film, in my humble opinion.

'Ghost Town' never saw a proper DVD release in the US. The only to get it was via a bootleg VHS to DVD-R transfer usually found at conventions, and you'd be lucky if it played at all. Not only is the Blu-Ray crisp and clear with vibrant colors and textures, it is also the first time it is seen in widescreen. The cover is the original poster of the skeleton cowboy in the street, but there is an alternate cover that I've never seen before on the other side that now serves as my cover.

Although there are no extras to be had, not even a trailer, if you are a fan of this film, it is worth paying a little extra for a Scream Factory disc, as they did a wonderful job presenting one of my favorite childhood films in 1080p. 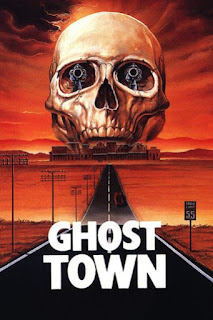