4/20 MASSACRE, OR PASS THE MURDER ON THE LEFT HAND SIDE

Coming April 3rd to DVD/VOD is Dylan Reynolds' 4/20 Massacre, the self-proclaimed "First Stoner-Slasher," starring Jamie Bernadette, Vanessa Rose Parker, Stacey Danger, Justine Wachsberger, Marissa Pistone, James Gregory, and Jim Storm as "Ranger Rick."
4/20 Massacre starts out with 2 hapless rednecks wandering through the hills looking for their "pot o' gold." In this case, the "pot o' gold" is a cache of guerrilla grown marijuana. When they happen upon the area, they start packing their bags full of Mary-Jane. Suddenly, someone clad in sniper grade  camouflage, rises up and slits one of their throats, leaving the other to run for it. 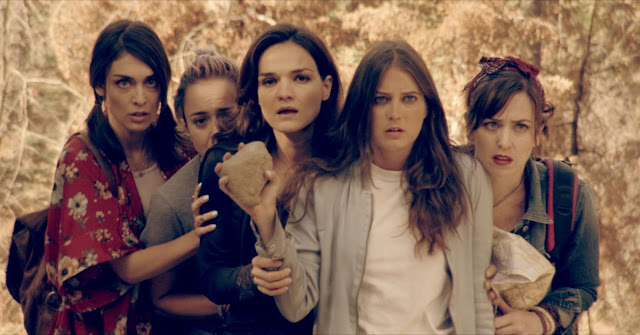 Enter our 5 protagonists: Jess (Bernadette), Aubrey (Parker), Donna (Danger), Rachel (Wachsberger), and Michelle (Pistone) as they embark on a hike to campsite to party for Jess's birthday, which happens to be 4/20. They run into Ranger Rick and he warns them about the guerrilla growers and to stay away. Then, remaining redneck, Buddy, who is hysterical by this time, happens upon them and gives them the weed that he and his friend stole, thinking whatever is after him will be after them, now. The girls settle in at the campsite and begin to party not knowing that the killer is now after them until it is too late. 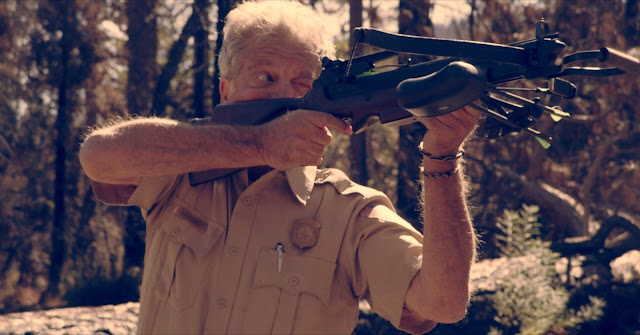 While 4/20 Massacre is not out to reinvent the Slasher-wheel, it is not boring; A little predictable, perhaps, but not boring. The characters are interesting and don't fall into the usual stereotypical trappings and are extremely  believable and well-acted, but Jess was the standout. She starts off extremely nice and caring, but when the shit starts to hit the fan she becomes ultra-intense, specifically when Aubrey and she return to the camp site to a grisly surprise. The way her eyes open wide as she is pleading with Aubrey to be quite makes the scene that much more believable and vivid. 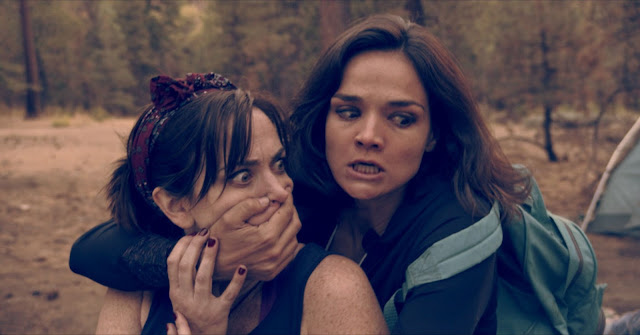 Nowadays, most Slashers opt to use digital everything from blood-spray to wounds. 4/20 Massacre is a little guilty of using digital blood, but aside from that, all the FX are practical and plentiful and awesome. All in all, 4/20 Massacre is a fun Slasher flick with plenty of gore, good characters, and subtle nods to classic Slasher films such as The Prowler, Friday the 13th Part II, and even borrows a line from Half-Baked.