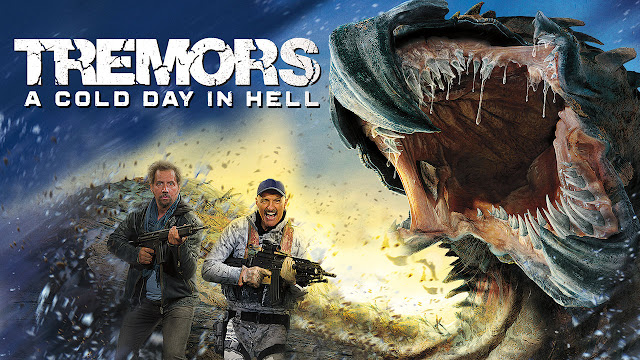 It was 28 years ago that the small town of Perfection, Nevada came under attack by large subterranean monsters, later known as Graboids. The 1990 Kevin Bacon film Tremors kicked off a franchise that nobody thought would still be around almost 3 decades later.


Tremors spawned 5 sequels and a 2003 Sci-Fi Channel series. (A new series was in the works at SyFy that would see the return of Kevin Bacon but as of April 28th 2018 they have passed on the show.)

The 6th installment of the Tremors saga, Tremors : A Cold Day in Hell was released on 5/1/2018 on Blu-Ray, DVD, and streaming on Netflix. Tremors 6 sees the return of Michael Gross (the only actor to appear in every movie and TV series) as Burt Gummer and Jamie Kennedy reprising his role as Burt's son from Tremors 5: Bloodlines.

When a research station located in the arctic circle is attacked by Graboids, Burt Gummer and son are on the case. Having no evidence of Graboids ever existing in the arctic, Burt is not expecting to find much, but an encounter with an Ass Blaster, (the flying phase in the Graboid life cycle) confirms they are in for a fight. However that fight is a little lackluster.

I'm a fan of the Tremors franchise and as a fan I have seen this series go through it's ups and downs and Tremors: A Cold Day in Hell is one of those downs.

The first Tremors is hands down the best in the franchise with Tremors 2: Aftershocks being a close second. Tremors 3: Back to Perfection is when the series began to have trouble and that trouble continued through the prequel film Tremors 4: The Legend Begins.

I had low expectations for 2015's Tremors 5: Bloodlines and was pleasantly surprised. While it wasn't as good as the first 2 films it was vast improvement over 3 and 4. So when I heard the director of Bloodlines, Don Michael Paul was returning for A Cold Day in Hell I was expecting him to at least match the bar he set with Bloodlines, but that was not the case.

A Cold Day in Hell doesn't want to just have the simple plot of, small group fights monsters, so they add unnecessary elements to pad things out. Like a secret U.S. government research group that Burt thinks is experimenting on Graboids and that Burt is infected with some kind of Graboid venom. Both of those could be good additions to the story but they feel like after thoughts and fillers just so they could hit their run time.

With each addition to the Tremors movies we learned something new about the Graboids. Tremors 2 gave us Shriekers, 3 gave us Ass Blasters, 4 showed us baby Graboids called Dirt Dragons, and 5 showed us that Graboids in Africa evolved to be bigger and more deadly then their North American cousins. A Cold Day in Hell doesn't add anything to the Graboid lore and because of that it becomes a just a throw away film.

The special effects are a mix of CGI and practical. The practical effects are pretty good and the CGI isn't bad but they don't seem as good as they were in Bloodlines.

The acting is about what you'd expect. Jamie Kennedy gives us the best performance of the film and Michael Gross is just hamming it up as Burt Gummer.

The bottom line is Tremors: A Cold Day in Hell is a very forgettable entry into the world of Tremors that adds nothing, loses focus, and might have you rolling your eyes with forced humor that never lands.

I would only recommend A Cold Day in Hell to the hardcore Tremors fans that already know what it's like to sit through Tremor's low points.